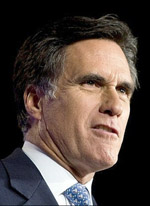 This is why I cannot support Romney in this primary. I didn’t support him in the last one, for that matter.

This video was made by The Campaign to Defeat Barack Obama, but it also has targeted

The Hill had more info on that group recently:

The Campaign to Defeat Barack Obama will launch a major ad campaign in Iowa accusing Mitt Romney for being a flip-flopping liberal in disguise.

The group has a long version of the ad, titled “Liberal Mitt’s greatest hits,” with clips of Romney taking positions that are anathema to many conservatives today.

Spokesman Ryan Gill described the initial video as a “roadmap” for the ads that will be aired, and said the group will run a six-figure ad buy in Iowa on cable and broadcast television to knock down Romney’s numbers there and damage his “inevitability argument.”…