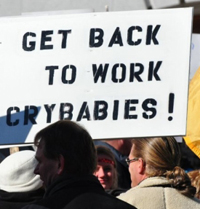 CNN has the story…

Wall Street protests swelled Wednesday to their largest numbers yet, after local unions pledged support to a third week of demonstrations against income inequality, corporate greed, corruption and a list of other social ills.

The crowd then looped back to the park, punctuating a 19-day protest that promotes a wide, if not ambiguous, range of messages.

Causes range from social awareness to radical change in America’s financial and political systems, while other participants appeared content to simply get caught up in the spirit of demonstration.

Still, while the fledgling movement has struggled in its definition, demonstrators appear steadfast in their general criticism of the country’s wealthiest 1% and its purported influence….

These fools really don’t even have much of a point to these protests. They have a mish-mash of stale, socialist/communist/anti-American blather and boilerplate left-wing nonsense, but no coherent purpose.