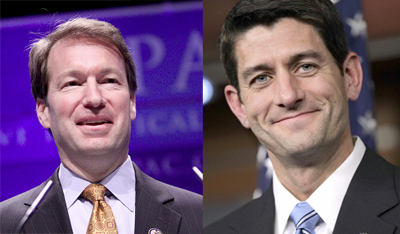 Representative Paul Ryan (R, Wis) will be headlining a fundraising event next week for Peter Roskam’s re-election campaign. Ryan is the Chairman of the House Budget Committee.

Rep. Ryan is best known for his A Roadmap for America’s Future, a budget proposal favored by many Republicans and conservatives. Ryan has become something of a rock star among conservatives.

Roskam is the Representative of the Sixth Illinois District and is running for reelection. No challenger has announced an effort to face him.

Only in his third term, Roskam rose quickly in the ranks of the GOP and is now the third in line of the House GOP leadership serving as the Chief Deputy Whip.

Tickets for the Oct. 29 cocktail reception and private dinner at Naperville’s Hotel Arista range from $100 (reception) to $2,500 (reception, dinner, photo with the congressmen and “preferential seating”) a piece.