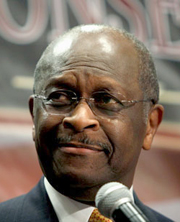 Politico assembled a taste-testing panel made up of a Democrat operative, a Republican operative, and a food blogger. Three pizzas were presented in a blind tasting and the result was that the Godfather’s pizza was deemed the worst of the bunch.

But was this a straight forward, unbiased test? Hardly.

I don’t know about you but if I was asked to evaluate a pizza that was hours old, I might not find it too tasty, either.

It might seem unlikely that an establishment Republican could be disposed to be kind to insurgent candidate Herman Cain. But you be the judge.

All that aside there is an even greater problem with rating “Herman Cain’s pizza.” It isn’t. Herman Cain’s, I mean. You see Cain has not been associated with Godfather’s pizza since 1995! How can we call Godfather’s Pizza “his” when he hasn’t been part of the company for some 15 years?

Are we to expect that Godfather’s has made no ingredient change in 15 tears? No process alteration, to formula changes… nothing? Are we expected to believe that after 15 years Godfather’s is frozen in time from 1995? Few corporations make no changes in 15 years, to be sure.

So, not only was the pie tasted a bit outside that 30-minute window of freshness, but the people tasting seem to have been politically biased, not to mention that said pizza could hardly be tagged as “Herman’s” pizza because he’s had no connection to the company for 15 years.

Could this all be any more biased?