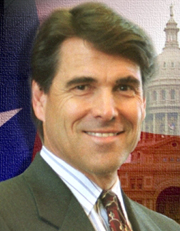 The left-wing media’s newest attack on Rick Perry is an attempt to make him into a “birther” — one of those folks that think Barack Obama is not a natural born American, a requirement to become our president. This new attack, though, is almost Clintonian in its careful avoidance of the truth.

The main attack started in a Parade interview featuring Texas Governor Rick Perry, but is being taken up as the cause célèbre by the left-wing, George Soros-funded attack dogs at Media Matters, Think Progress, and TPM as well as sites like Mediaite. But this “story is, as they say, all smoke and no fire.

In the interview Parade directly asked whether Perry thought Obama was born in the United States. Perry’s actual answers were, “I have no reason to think otherwise,” and “It doesn’t matter. He’s the President of the United States. He’s elected. It’s a distractive issue.”

Let me make this clear for the Old Media… Perry sees no issue with where Obama was born and takes the president’s word for his citizenship.

But even as Perry pretty clearly answered the question, the left-wingers are desperate to manufacture a faux controversy out of the interview.

There isn’t much to hang your hat on for a left-winger hoping to “get” Perry, nor for a birther hoping he’ll support their pet conspiracy theory. But it serves to form the only justification for their attack on Perry anyway.

The facts of this story are that Perry said he had no reason to doubt Obama’s birthplace and that it was a meaningless, “distractive issue,” regardless. Hard to make a controversy out of that!

But, oh are they trying.

Transcript of Relevant Section of the Interview:

Governor, do you believe that President Barack Obama was born in the United States?

I have no reason to think otherwise.

That’s not a definitive, “Yes, I believe he”—

Well, I don’t have a definitive answer, because he’s never seen my birth certificate.

But you’ve seen his.

You don’t believe what’s been released?

I don’t know. I had dinner with Donald Trump the other night.

I don’t have any idea. It doesn’t matter. He’s the President of the United States. He’s elected. It’s a distractive issue.