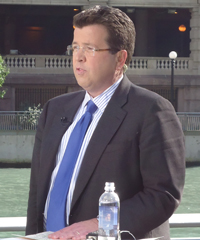 Fox News is 15 years-old this year. Not quite sweet 16, but for a cable news organization, especially one that started out in so few homes, 15 was all it took to dominate the news biz. And that is pretty sweet, indeed.

To celebrate the big one five, Neil Cavuto, of the aptly named Your World With Neil Cavuto, took his show on the road. Neil’s Monday broadcast was beamed to the world on a beautifully sunny Chicago afternoon from an open-air veranda at Trump Tower overlooking the Chicago River.

Between broadcasting his Your World and his Fox Business Network program Cavuto, I was pleased to be invited to attend the set and to have a few words with the big guy, himself.

Cavuto is one of the original Fox men having been with the network since the beginning. In fact, he’s not just an on air news reader, he’s the only air personality that is also a Fox executive having served to help program the business coverage for Fox News. He has also been an important part of the creation of Fox Business Network.

Neil is a busy guy. Along with being on the most watched cable news station, Cavuto is the author of two New York Times bestsellers, More Than Money: True Stories of People Who Learned Life’s Ultimate Lesson and Your Money and Your Life. He was named “best interviewer in broadcast business news” by The Journalist and Financial Reporter, and has been nominated for five CableACE awards.

A quintessential survivor Mr. Cavuto is a survivor of stage 4 cancer not to mention fighting Muscular Sclerosis for the last decade. So when it come to being embattled, Cavuto is no stranger to the concept.

The pressure he faces in his personal medical battles are naturally more pressing than the full-on, left-wing attack that he and his cable networks face on a daily basis, of course, but when ever one thinks of Fox News, one is inexorably drawn to those attacks by Fox’ enemies. I asked Neil if, after all these years, the vehemence of these attacks on Fox News surprised him any?

“Well it does, Warner,” Cavuto said, “because in the beginning, there was a time when we could have filled in hours with expletives and no one would have paid attention. I remember in the first four years no one was watching. It was like I was in the witness protection program and it took a while… I guess I’m surprised sometimes, Warner, with the vehemence with these remarks but I take it in stride. I try to focus on what I do. You know I bored people with this story many times but I repeat it for a reason. I’m not conservative or liberal, I’m not red or blue, I’m just green, I’m the nerd that follows the money; where it’s going where it’s not.”

While conservative ideals absolutely serve as Cavuto’s core, he told me that he was not bought and paid for by the far right. It really is all about the math.

“I was an intern for Jimmy Carter, I was critical of the bailouts when they began with George Bush, critical since… I guess I’m a cheapskate,” He admitted. “I don’t like money going out the door and not being held accountable. So, that’s my gig and people can take from it what ever they wish. But I have no agenda there, my only agenda is the money and where it’s going or more to the point not going.”

And that accounting is not looking good, Cavuto said.

“Now I don’t know if you have kids, but I do and I’m not optimistic that they’re going to get the kind of same things you and I are. So, I think if I could do nothing more than hold officials accountable on the left and the right about that then I’m doing something of value. I hope, I hope.”

I mentioned that he and Fox News might be getting the last laugh anyway, seeing as how the network is constantly number one in the cable ratings. But Cavuto warned that being number one is harder than it looks.

“It’s a lot easier climbing that ladder than staying on top once you get there,” he said, “and I think there’s a certain lethargy the develops when you get up there, that, that’s it, it’s over. So you still gotta work hard, you still gotta work your ass off, you still gotta be on top of these things. And you can’t assume that whatever you’re having is going to last forever. Whether it’s bad or good. I always like to remind my staff and everyone else, ‘guys we still have to keep hunting because now we’ve got a bullseye on our you-know-what.’ In my case it’s a very big bullseye! So, I try to keep hopping just to keep ahead of ’em. But, you’re right. It’s different in one respect we’ve gotten to the point now where people will rip us a new one, but that means we’re just more of a target and we have to be cognizant of that.”

I noted that the constant attack on Fox News is especially interesting because there really has been a lack of any major scandals in all these 15 years. “We haven’t blown up any trucks,” Cavuto joked referring to the Dateline NBC episode from 1992 where pyrotechnics were placed on a truck to “simulate” how an accident could blow the truck up, yet NBC didn’t inform viewers that the “news” piece was manufactured. I also noted that Fox has had no major plagiarism scandals like The New York Times yet the station still gets pounded with hatred far and above what it might deserve from its actual efforts.

“Your point is well taken. I always say to people, can anyone force us to take down a story, have we gotten anything substantially wrong, have we gotten a fact amiss, have we misread the budget numbers, because I’m such a nerd with this stuff, I check, double and triple check my math and that’s what my gig is. And if I’m wrong on those numbers, if I’ve misrepresented… if a Democrat or Republican come son and says, “no Neil you’ve got that wrong,” as they did in the Bush administration… “no his medicare prescription plan is paid for,” I said prove it and they couldn’t. Or the case with this president that the healthcare was paid for, I said prove it, they couldn’t. So, I think I’m pretty fair and balanced in being a pain in the ass on that front. And that’s all I can do.”

Finally, I said that even with all the pressure to get it right on-air, Cavuto has had a number of personal medical scares that has been piled on top of those pressures at work.

“You know I only use that when I want to try and get out of work. Or if I’m particularly lousy, ‘Oh, it was the MS!'”

“But you know, one thing I discovered is, and you’ve probably dealt with this in your own life or you’ve know loved ones who have, or lost someone, as soon as I start thinking about me and what I’m going through I’ve heard of ten people who are dealing with more. My whole first book was about that, it was inspired by my self-absorption about my disease. And people would call me up and say, “Neil, you think you have it bad, I just lost my son,” or “my business is gone,” or “my wife is gone,” or, “I’ve got terminal brain cancer,” and then I stopped and I thought, “well, why don’t I just get over myself?” You’ve probably realized that some TV people can be a tad self-absorbed. So, it was a good lesson in life for me. And I think that… I know this sounds, maybe phony, but I really mean it that the best thing that ever happened to me were these illnesses because they keep my head in the right perspective. That’s what I try to do.”

But that seems to be the best example of the core of our Mr. Neil Cavuto. He’s come to accept his part in life and he’s enjoying what he can while it lasts. He’s just a genuine and gracious guy.

So, among the miles of cables, camera tripods, light stands, and a myriad of off camera personnel darting to and fro, there I was watching Cavuto do what he loves most; making sense of the complicated world of economies, high finance, and money. The self-described “nerd for this stuff” was in his element. 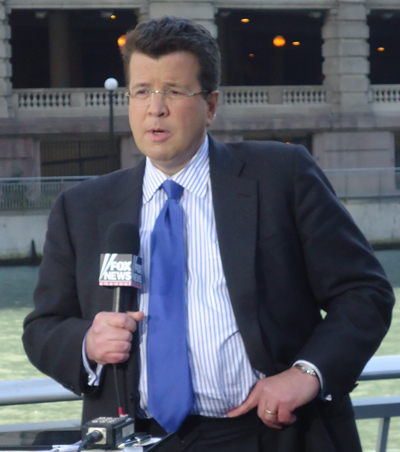 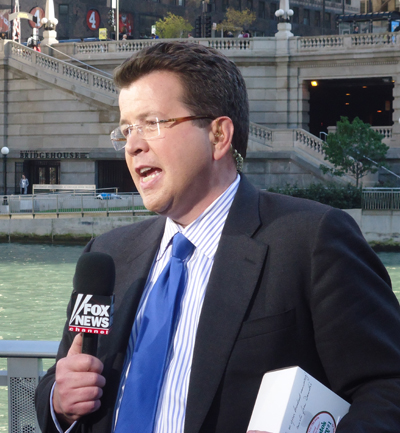 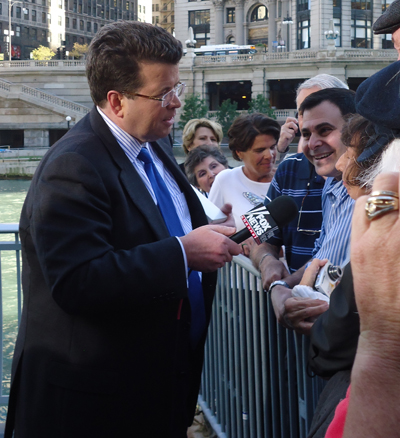 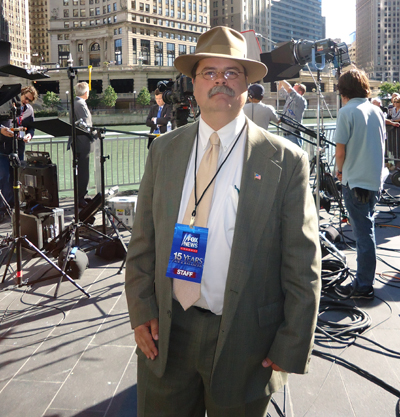 Behind the scenes on Cavuto’s Fox News Program 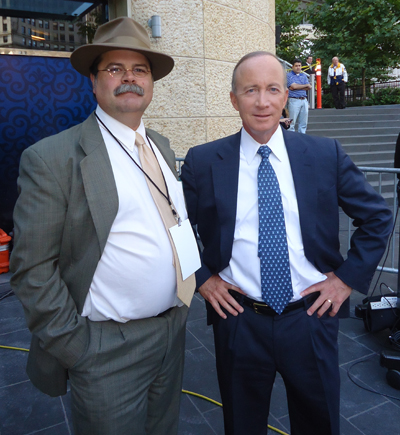 Me and Gov. Daniels 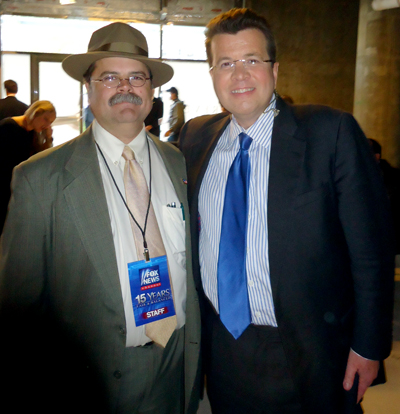 The Fox News 15th Anniversary road show will continue through October. On October 6th, Sean Hannity will be doing his show from Atlanta, the 11th Bill O’Reilly will be broadcasting from Boston, and Greta Van Susteren will hit Phoenix on October 20th.