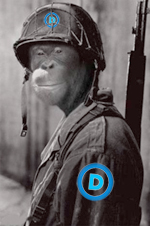 Apparently, Congresswoman Jan Schakowsky of the Illinois 9th District, a sitting Congresscritter, mind you, decided it was a great idea to march with the Occupy-Whatevers on Thursday.

Interestingly, a large contingent of these people sported T-Shits with Che Guevara, Mao Tse-tung, and other communist heroes emblazoned upon them. Guevara, a murderer, coward, and communist, is particularly loved by these useful idiots. But Mao is the greater mass murderer and genocidal maniac, of course.

Regardless of which mass murderer they most love, the fact is that these people hate the USA and everything it stands for an equal amount — maybe even more. And these are the sort of haters that a sitting Congresswoman is keeping company with?

Andrew Marcus gives us some scenes from Chicago.

These “protesters” are increasing their violent rhetoric daily and Jews seem to be a particular target of their hatred. It would be surprising if these protests fade from the scene without major violence associated with them. We’ve already seen mass arrests, property damage, and huge amounts of garbage left by these people – quite unlike the last two years of Tea Party events.

Interestingly, even as the last guy in the video above was so proud to say, “Look what we’ve done,” a vexing question has to be put to him and his comrades. WHAT have you done? What solutions, what fixes, what new reality have you actually created?

The answer? None. Not a thing. Zip. Nadda. This is a “movement” empty of any moving! But from the hateful and violent rhetoric being ramped up by these people it seems violence will be the most likely outcome. And after that? Little to nothing of substance.

As to the impending violence, I sure hope I am wrong.