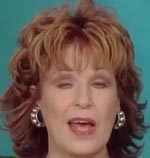 Sadly, ABC’s The View is what passes for as “intelligent” conversation on TV, these days. The View yacker Joy Behar’s blather is also indicative of the historical illiteracy of the far left in this country.

Herman Cain made an appearance on the coffee klatch show this week and genius Behar had this comment about the history of the Republican Party for him:

The Republican Party hasn’t been black friendly over the many centuries in this country.

Firstly, of course, this county hasn’t even been a country for “many centuries.” We are only about 235 years old as a nation! Most people don’t claim two as “many,” but only as “a couple.”

Secondly, the Republican Party has also not been around for “the many centuries in this country.” The party is only about 155 years old.

Thirdly, when the party itself was started it was derisively called the “Black Republicans” by Joy Behar’s Democrats because it was so friendly to America’s blacks. The party was the pro-black Americans party started with a core principle of freeing all blacks from slavery and assuring them civil rights! In fact, for many decades after the Civil War and on into the 1900s most black Americans were Republicans, not Democrats. Blacks being Democrats is relatively new in our history.

The truth is that the 1964 Civil Rights Act saw strong Republican support. Of the total number of Republicans then serving in Congress support never dipped below 70% on any of the final vote counts. The original House version got 80% GOP support, the Senate version got 82% and the final vote in the House was 82% of Republicans in support. On the other hand, Congressional Democrats never saw higher than 69% of its membership in support of civil rights for blacks.

And who one of the leading voices in favor of passage? It was Illinois Senator Edward Dirksen, a Republican. Who was a leading voice opposing civil rights? Senator Robert Byrd, Democrat from West Virginia and for years afterward celebrated as the Democrat’s best man.

If it were up to Democrats in 1964 the Civil Rights Act would never have passed. Yet here is the uninformed Hollywood “entertainer” Joy Behar revealing her ignorance and trying get away with lies about the GOP once again.