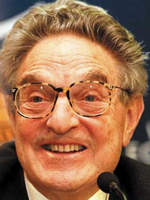 Richard Miniter has a very interesting article in Forbes about the damage anti-American millionaire George Soros is causing to both Central Asia and the foreign policy of the United States.

Soros is an interesting if risible figure. For good reason his name is a boogieman name for we on the right. Truthfully, though, most on the right don’t really have a full grasp on what it is he does to make his name worthy of being put in the pantheon of history’s worst haters of America.

People are aware that he uses his huge fortune to fund left-wing causes and organizations in the U.S., but many conservatives these days are unaware that Soros has also used his cash to topple communist dictators in the former Soviet nations in Central Asia. And while this seems like a good thing, there is all sorts of bad things that have happened because of his interference not the least of which is a growing anti-Americanism in nations that were already suspicious of the United States.

How could that be, conservatives might wonder? How could the leading hater of the U.S.A. be promoting even more anti-Americanism overseas? Shouldn’t his actions be welcomed by left-wingers everywhere?

Well, no, not really. As Miniter notes, it isn’t that Soros is promoting red, white, and blue ideals in Central Asia, it’s that his interference, as dimly understood even there as it is, is seen as a covert effort of Obama’s foreign policy in the region.

Now, again, many conservatives here may have a knee jerk reaction to assume that George Soros’ efforts in places like the Ukraine, Russia, Georgia, and Azerbaijan could easily coincide with Obama’s foreign policy ideas or might even be a that covert policy that makes Central Asian countries suspicious.

This, however, ignores what are the facts on the table. Soros has for decades been plying his own ideas, his own foreign policy, and he is in no way connected to U.S. policy makers. In fact, U.S. policy makers and their handmaidens in the Old Media consistently ignore what Soros is actually doing in Central Asia and this is causing all sorts of problems for the U.S. most especially because every move Soros makes in the former Soviet sphere is seen as a CIA-like American effort to mess around with their countries.

As Miniter notes, Soros has been spending billions in the region to create policy organizations, think tanks and defacto political parties. His efforts have been so successful in the country of Georgia that his operatives fill many of the government’s top offices. He’s attempting the same sort of control over Azerbaijan. His influence is seen throughout the area and is viewed by Russia as an unwanted American influence.

Everything Soros does impacts negatively on the U.S., yet Obama sits idly by doing nothing about it. Don’t get your partisanship on, though, because Bush did not do much to try and counter the Soros effect, either.

There are good reasons not to privatize the dictator-toppling business. Elected governments are supposed to balance competing national interests (hence the seeming incoherence of some aspects of America’s foreign policy) and officials can be held accountable for their actions, either by voters, courts, legislatures or other governments. And democracies forge their foreign policies in public debates.

Soros’ foreign policy is different. He pursues his own vision, undisturbed by his effect on other nations or the interests of his own. It is hard for foreign governments to hold him accountable and his goals and methods are usually kept secret.

I won’t rehash all of Miniter’s great points here as he does it far better than I could. In any case, go over and take a look at Miniter’s important piece in Forbes. It will help you understand the complicated world of George Soros a little bit more.