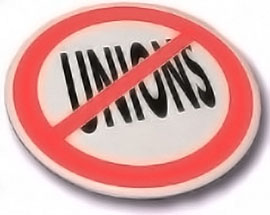 Reuters has a very interesting article detailing the fall of the United Auto Workers (UAW) in the modern era. It is a long article, but if you are interested in the way the UAW intends to keep itself relevant to the auto industry on into the future, it is worth the read.

It is also a good article if you want a glimpse of the possible end to the UAW. Its deep financial troubles, its steady loss of members and plants to represent, and its powerlessness to spread its cancer to other auto makers in the south is an ominous warning that the UAW might be headed for the dust bin of history.

Let’s not start popping champagne corks yet, though. We should not count the UAW out, of course, as it is still very powerful. But things are not looking good for the once supremely powerful union.

One thing that this means most is that the UAW will have far, far less cash to spread around for Democrats. The union is starting to realize that it must turn its finances inward in order to survive. As the next decade moves forward the UAW will find that it simply cannot afford to line the pockets of Democrats with the millions of past campaigns.

This is an important link to break. The sooner it happens the better.

In any case, this is a good article…

(Reuters) – Bob King, the president of the United Auto Workers, has a problem: the labor union that credits itself with creating the American middle class has glimpsed the end of the line.

Two years after the wrenching restructuring of the U.S. auto industry and the bankruptcies that remade General Motors and Chrysler, the UAW is facing its own financial reckoning. America’s richest union has been living beyond its means and running down its savings, an analysis of its financial records shows.

Unless King and other officials succeed with a turnaround plan still taking shape, the next financial crisis in Detroit may not be at one of the automakers but at the UAW itself.