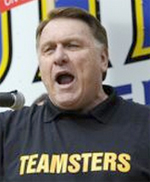 After Teamsters President Jimmy Hoffa incited violence against Republicans as he introduced President Obama at Monday’s rally in Detroit, at least one organization called for Hoffa to resign over his intemperate and violent rhetoric. The Rockford Tea Party of northern Illinois made the call for Hoffa to resign.

Rockford, IL – September 5, 2011 — The Rockford Tea Party calling for Labor Leader and Democrat Party Operative, Jimmy Hoffa to resign after the Union Leader made calls prior to President Obama’s speech in Detroit to incite Union members to violent action against Tea Party Americans.

“They’ve got a war, they got a war with us and there’s only going to be one winner. It’s going to be the workers of Michigan, and America. We’re going to win that war,” said Hoffa.

“President Obama, this is your army. We are ready to march. Let’s take these son of bitches out and give America back to an America where we belong,” Hoffa said.

Calls to violence can never be acceptable in this civil society. Hoffa’s remarks were made in an introduction to Obama speaking to Auto Workers and Unions in Detroit and this sort of angry, hateful, call to violence should be repudiated by the President with a call from the President to ask Hoffa to resign his very public position of influence.

Jimmy Hoffa must resign and should never hold a position of Public Influence with any organization again.

On Tuesday, Teamster Hoffa doubled down on his comments saying that he is proud of his violent rhetoric. For his part, Obama has pretended nothing happened. So, despite all his faux claims for a new civility, it is plain that the hypocrite-in-chief only intends for the right to be quieted, not his own, violent, profane compatriots on the left.