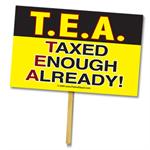 It is a lie that serves as the left’s basic narrative for the birth of the Tea Party movement and this weekend it was The New York Times’s turn to push that lie claiming that the Tea Party is “led by veteran conservative activists and bankrolled by billionaires.” This bull hockey (yes, I said bull hockey) can’t be debunked enough, because to undermine the legitimacy of the Tea Party movement, extremists and left-wingers that pretend to be journalists push this lie for all its worth.

Left-wing Georgetown Professor Michael Kazin, who masquerades as a history professor by day, penned this latest piece for the Times pushing the left’s favorite false narrative about the Tea Party movement. The piece, lamenting the loss of the spirit of activism and protest in the American left, revealed a professor paid for by our tax dollars longing for the days of the violent, anarchist protests of the early 20th century.

Kazin cries that the left has lost its umpf and wails that “the Tea Party rebellion” has instead come to the fore.

“Instead, the Tea Party rebellion — led by veteran conservative activists and bankrolled by billionaires — has compelled politicians from both parties to slash federal spending and defeat proposals to tax the rich and hold financiers accountable for their misdeeds,” Kazin moans.”

Of course, his entire blithe claim that “the Tea Party” is run and funded by the rich and powerful in conservative circles is simply untrue. It is a claim, though, that is repeated over and over again by the left and its handmaidens in the Old Media.

The truth is that “the Tea Party” is no single entity funded by billionaires and run by long-time conservative activists. This is a lie that reflects what some call “projection” because it is actually the left is run this way. Left-wingism in America is a top down, big money game and always has been. There are no true grass roots efforts on the left. The Tea Partiers, however, are not like that and never have been.

Firstly, the real truth is that there is no such thing as “the” Tea Party. Tea Party groups are usually small, rarely interconnected, and barely funded by anyone — even their own members, unfortunately. Also, there is no true national organization that can legitimately claim to “be” the Tea Party, though many are out there trying to urge activism.

So, where does this “billionaires funding the Tea Party” claim come from? Mostly from two groups. One is Americans for Prosperity and the other is Freedom Works. Both are most certainly heavy activists, both have a large bankroll behind them (one is funded now by the dreaded Koch Brothers), both have big name conservative activists working for them, and both most certainly do coordinate with Tea Party groups.

But neither actually run any Tea Party groups. Cooperating with is not the same as running. And more importantly, both were around long before the Tea Party movement started.

Many of these folks were certain that the Tea Party would be a flash in the pan that would have no sticking power. They were surprised when the opposite happened and were left on the outside looking in at the beginning.

Few Tea Party groups have much by way of money. Almost every Tea Party activist is a true grass roots organizer working out of pocket, for the cause, with only their fervor for America and their principles guiding them. There is no “billionaire” buying them lunch, much less footing the bills for their groups.

So, whenever you see this lie that the Tea Party is “led by veteran conservative activists and bankrolled by billionaires” know that this is the way the left is attempting to control the narrative. It is a lie, certainly, but, as most leftists believe, the more you yell out the lie, the more people that will come to believe it. So, when you see this lie, debunk it, won’t you?