As I sit down to craft this report I just this moment returned from a fundraiser for former Speaker of the House Newt Gingrich held in a small town called Lake Barrington in the western suburbs of Chicago.

It was a nice, congenial scene unfortunately held on one of Chicago’s hottest evenings with temperatures reaching the upper 90s. Despite the steamy weather, though, at least 150 guests paid $25 a head to come sit, socialize, eat dinner, and ultimately meet Newt and Callista Gingrich and hear him speak. An undisclosed number of higher donors met with the Gingrich’s inside the home of the hosts prior to Newt’s address to those gathered. 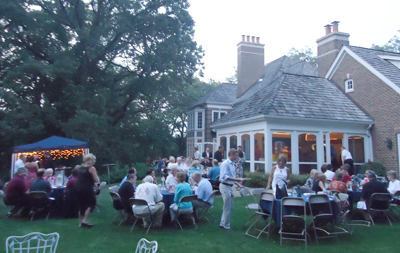 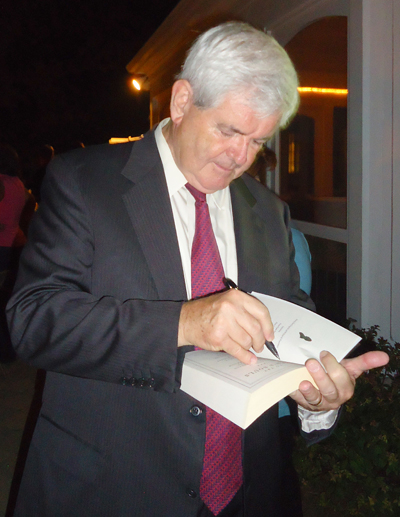 After a BBQ dinner, the Gingrich’s emerged from the home of Keith and Stephanie Hanson and began to mix with the crowd signing books, shaking hands, and posing for photos with the excited donors.

Here I have to say that politicians always amaze me with their ability to remember faces and names. As Callista made her way toward me, she gave me a look of recognition, came on over, grasped my hand and reminded me of just where we last saw each other. She even remembered my first name. Only a few minutes later, Newt came up to me and also remembered that he’d met me before. This always amazes me. I mean, I’ve only met Newt and Callista about four times or so and always in a sea of people, not one-on-one. Yet they both at least recalled they’d met me before. I have to say, I don’t think I could achieve such a feat of memory after meeting thousands of people every year like these politicians do.

Anyway, after about 20 minutes of wandering through the crowd meeting and greeting, Newt took to the mic and gave us about 10 minutes of encouragement. 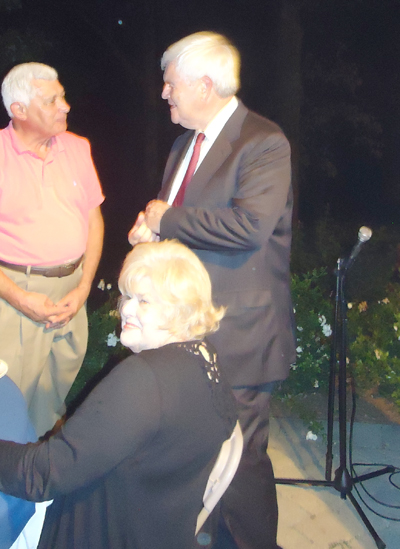 He thanked his hosts and told us how happy he was that this gathering went from an assumption of some 25 or so visitors to the over 150 that ended up attending. He was pleasantly surprised that several Tea Party groups got wind of the event and came out to see him.

Then he went right for the Obama administration’s failures saying that we now have a president who says that people that own homes like the one we were visiting that night “own too much and make too much” yet he’s a man that flies a giant bus from city to city to “tell you people to go buy a Prius.”

He told the folks that he is running for president “because the country is in trouble.” He went on to say that he needs people just like those he met tonight to help him shrink government. But, Gingrich said, “if we shrink government we need to grow citizens to fill the gap” left by a retreating government power structure.

Newt also reminded the group that he had always been “on the outside of the Washington establishment,” even when he was Speaker of the House.

Still, Newt was sure that with the help of voters, even Illinois could be won. “If you stay at 9% unemployment,” he said, “then there’s not a state that isn’t tough for Obama to win unless he can fix this economy. And since he believes in a sort of bureaucratic socialism I don’t think he can do it.”

Newt said that his website (www.newt.org) was going to start keeping track of how Ronald Reagan’s recovery measures up against Obama’s down economy at similar times in their relative presidencies. Newt told us that at this time in Reagan’s first term his recovery would have brought the equivalent of over 3 million new jobs whereas Obama’s faltering economic malaise has done no such thing. In fact, I’ll note that Obama has us at zero job growth for the first time since 1945.

Newt said that one of Reagan’s reelection slogans was “leadership that is working.” Newt noted that this week Obama sent out a campaign email that said he was “frustrated.” Gingrich then quipped, “I don’t think you can run for reelection on the slogan ‘I am frustrated.'”

Also during his address he plugged Callista’s upcoming book release, “Sweet Land of Liberty,” a children’s book meant to get kids between 5 and 8 interested in American history.

It was a nice evening and I want to thank Bruce Donnelly of the Barrington Tea Party for getting me in to see the Gingriches.

Oh, and to prove Callista, Newt and I have met in the past (I know how skeptical you Internet Tubers are), a trip down memory lane… 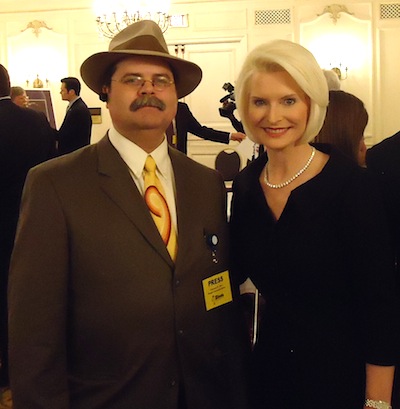 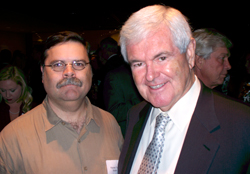