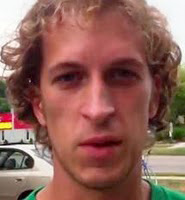 A known liberal activist that has for months been stalking several Republican lawmakers in Wisconsin, verbally abusing them, has finally crossed the line into a physical attack. So… where is the Old Media to chronicle this assault? Sadly, no where to be seen.

On Sept. 14 left-wing activist Miles Kirstan entered The Inn at 22 S. Carroll Street in Madison, Wisconsin, began to harass some GOP lawmakers patronizing the establishment, and ultimately attacked them, throwing a mug of beer on them.

The Madison Police Department confirmed to the MacIver Institute that the incident occurred and the group found that Republican State Rep. Robin Voss (Burlington) was the main target. Reps. John Nygren (Marinette) and Scott Suder (Abbotsford) were also a victim of the attack.

Kirstan is a well-known face among the extremists that have been railing against the Walker administration over the budget cuts and other legislative efforts.

He’s well enough known that some halfwitted groupies have excitedly delivered their hosannas to him online.

For instance, one young woman named Rachel gushed on tumblr: “I personally know the guy with the microphone in this picture. His name is Miles Kristan and he is a badass motherf**ker. I feel awesome just knowing him.”

If I had fans like that I’d be ashamed.

Of course, Kirstan seems to have no shame, so I doubt he’s much worried about misleading impressionable young girls. He’s been arrested several times during his several years-long campaign as an extremist and activist. Earlier this month, for instance, Kirstan was led away by police from Representative Paul Ryan’s townhall. He was also arrested in August for a driving infraction. Last year he was arrested for trying to disrupt a speech being given by JEB Bush. 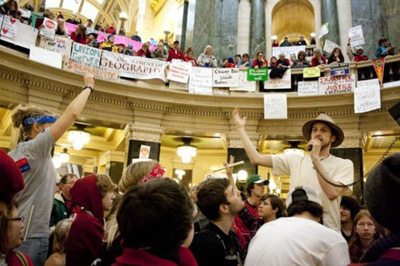 Kirstan addressing protestors in the Capitol Building in Madison

Kirstan is not just a Walker-hater, though,. He is also an anti-war activist. It isn’t surprising that he’s dropped his anti-war business to become a member of the anti-walker brigade. Few anti-war activists are much interested in protesting wars during Obama’s presidency, after all. I mean, he has to have something to do while he waits for a Republican to take the White House, ya know?

This stepping up of Kirstan’s violence, though, is not surprising. It shows the increasing desperation of the left in Wisconsin. They went from thinking they had a sure-win issue to one by one losing every effort to destroy Gov. Walker and his party. To such extremists, it is only natural for physical violence to be the next steppingstone in their pathology.

Finally, one has to wonder why this didn’t become a national story? If it was a Tea Party guy throwing a mug of beer at a Democrat lawmaker — no matter when the incident might happen — the news would have this guys, his family, his co workers, his grade school friends, even faux psychologists, talking about the incident for a week solid.

Yet, this uncivil, left-wing troublemaker is ignored.

Gee. Don’t you wonder why that is?