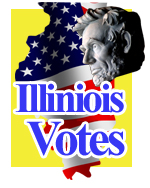 In a follow up to my post last week on the proposed changes on how Illinois selects the delegates for GOP presidential candidates, more needs to be said about this as on the evening of Tuesday, September 6, the Illinois GOP State Central Committee will meet to discuss whether or not the changes will be accepted.

My points made last week about the State Central Committee endeavoring to take away even more ability of Illinois GOP voters to influence the milieu of Republican politics in Illinois was written before I had seen the final wording of the resolution in question. From the old language I had seen up to that time, it seemed pretty clear that the GOP State Central Committee was trying to take even more power unto itself. This was intolerable, especially after so much GOP failure over the last decade in the Land of Lincoln.

However, I have now seen what is up to now the full proposal, the one that will be discussed at the Tuesday SCC meeting. The most recent proposal mitigates my fears somewhat… but not entirely.

So, according to the revised proposal, the SCC will have no direct influence over who the candidates and their campaign staffers choose to be their representatives at the GOP national nominating convention. This is a change from the original language which basically said that the candidate’s campaigns would somehow have to consult with the SCC in the choosing.

The elimination of the SCC officially from having influence over who becomes a delegate is a good thing.

Now, some fear that this veneer of distancing the SCC from the choosing of delegates is a ruse. They say that whether the rule is explicit or not, the candidates will still come into our state and confer with the powers that be leaving all Tea Party groups and all independent groups out of the process of becoming delegates.

This may well be so. But here I caution everyone abut one thing… this IS the Republican nomination for president we are talking about here. It is only proper that the Republican Party of the state be heavily involved in the process for their own party nomination. I mean, we may be mad at that party, but it is still their process! If some consider themselves outsiders, it shouldn’t surprise them if they are on the outside during the nominating process.

See, the thing is that if Tea Partiers and independent conservatives want to have something to do with the delegates, well then they are going to have to get involved with the party. It IS a party thing, after all. Either that or they will have to go out of their way to become active participants in the campaign of the candidate of their choice so that said campaign will pick them to be a delegate.

Naturally, I understand how hard it is for Tea Partiers and independent conservatives to break into this hidebound center left GOP establishment in Illinois. But, again, this is a party situation and the national GOP have no real reason to accept the complaints of people that aren’t supporting the party. I know it’s a disgusting catch 22, but it is reality whether we like it or not.

Further, it is already true that candidates come courting the powers that be, anyway. I mean, that is the nature of the beast. So, I am not sure this rules change alters anything pro or con to the reality as it exists.

Now, as to the election thing… yes, the voters will no longer be choosing or electing the delegates that will represent the candidates at the national convention. It is sad to see GOP voters losing yet one more avenue to influence the GOP in Illinois. However, let’s look at it from the candidate’s viewpoint.

As it stands now delegates have to field petitions like office holders do in order to get on the ballot to be chosen by the voters as delegates. That means they need to get 600 signatures on petitions to qualify to be on the ballot. This is 600 signatures in each congressional district they are running in for each delegate and those 600 signatures are above and beyond the signatures that the actual candidates themselves need to run for president on our primary ballot. That is a lot of work. So, this is a bit much to expect of the presidential candidates and it is a requirement that few other states force on them. This makes Illinois not a very pleasant place to get on a primary ballot.

Then you pile on top of that the fact that these petitions are open to the same sort of political gamesmanship that the Democrats indulge in this state: the ever popular petition signature challenge. This costs even more money as the candidates have to file paperwork and hire lawyers to defend the petitions. And if the candidates decide not to do all this, they can easily find themselves without delegates in Illinois.

In any case, it makes it very hard on candidates to get delegates in this state. It makes our state unattractive campaign grounds.

Now, the next thing is the winner take all deal. Those selling this rules change say that making our delegates a winer take all system will get the candidates to really step up their game here. If the candidates understand that if they win 50% of the primary vote they will get all the state’s delegates, supporters say, then those candidates will really work hard to win Illinois and will, therefore, campaign in the state far more than they have in the past.

I can see the logic in that claim. As it stands right now, there really is nothing that entices a candidate to work harder than it takes just to get delegates in Illinois. If we make getting those delegates easier on the candidates and on top of that give them the brass ring of all the delegates if they can win 50% f the primary votes, well it does seem that we might find Illinois being quite a bit more attractive to the candidates during the campaign.

So, these are the pros and cons. Something we all must think about.