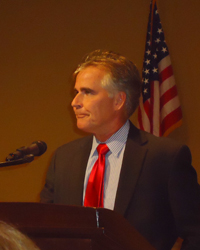 In one of the most well attended yet contentious State Central Committee meetings for some time, the movers and shakers of the Illinois GOP met on Tuesday evening to attempt to decide if the system for certifying delegates for GOP presidential candidates should be changed. The short answer is that there was a lot of sound and fury from party members lower on the food chain, much debate from those on top, and questions all around all of which resulted in a failure of the proposal to make the change. In the end a resolution was passed to keep it all the same as it was in 2008.

Beginning at 5 PM the meeting at the Boilingbrook Country Club was well attended by both SCC members, concerned party members, a few county party chairs, committeemen, and Tea Party activists. House leader Tom Cross made an appearance as did long-time conservative activist Jack Roeser. Illinois State Treasurer Dan Rutherford was also there, like many of the others, to speak about the proposed rules change.

I should note that one reason this rules change was contemplated is that the national Republican Party is trying to get every state to change their system into one of proportional representation of delegates to the convention. The RNC gave Illinois the leeway to change its process and several activists took this opportunity to propose a major change to the system, a change that meets the law as well as state and national party rules.

Certainly the change being contemplated was extensive. Currently, the presidential candidates are awarded delegates via the ballot box, a method only three other states favor. Campaigns come to Illinois, build their Illinois machine, and solicit for delegates. These delegates then have to stand for election on the primary ballot. To do so they must each get 600 signatures of voters in their district so that they, the delegates, can get on the election ballot. Then, those elected are considered official delegates to the GOP nomination convention.

The proposed change would have eliminated the petition requirement. But that’s not all. The new rule would also have changed the current ran-and-elected delegates to a winner take all system. If a single candidate would achieve a 50% or more total of the primary votes, it was being proposed that said candidate would then get all of Illinois’ GOP delegates.

The original language had stipulated that the 50% would have been tallied by district and not state-wide, but at 6:45 Carol Smith Donovan of District 7 made a motion that the district language be struck and language to make it state-wide was added in its place, a motion that passed in a 67 to 32 percent vote of the SCC members.

After the GOP general counsel chimed in with some clarification to a few questions asked, Party Chairman Pat Brady explained the proposed changes as best he could. Brady called the current system “arcane” and “silly” and said that as things stand today it was very difficult for presidential candidates to gain their delegates in Illinois. Brady felt that a winner take all system coupled with removing the need to spend time, money, and organizational energy by the presidential candidate’s Illinois campaign would mean more money for the actual campaign. Brady felt that this would also make it more fair for the campaigns with less money to spend on organizing and would open the way for far more people to get involved in the Illinois contest. These changes, he said, would mean that the candidates would pay more attention to Illinois. One other thing Brady thought was that by getting rid of the requirement to gather petition signatures then the long-time Illinois game of petition challenges would be also eliminated from causing candidates problems.

Party Chairman Brady opened the floor for discussion on the rules change after his comments. A healthy debate began, one that hasn’t been seen in an SCC meeting for quite some time in the Land of Lincoln.

What started out as a proxy fight between Mitt Romney’s Illinois team and Rick Perry’s developing team in the state, turned into a pretty extensive debate on the actual merits of the proposal.

After a few comments by Will County’s Dick Kavanaugh, State Treasurer Dan Rutherford came to the mic to speak against the proposed rules change. He began by countering Brady’s point about petition challenges. Rutherford reminded those gathered that there hasn’t been many petition challenges for delegates (we later heard that there hadn’t been a serious challenge since 1976). He wondered why everyone was worried about them now?

Rutherford said that the “bottomline” was that the candidates “know the game plan here and if you want to be perceived as the leader of the free world you should be able to take the time to get your delegates on the ballot” in Illinois like we always have before. The candidates know the rules, Rutherford said, and there should be no problem observing them.

Chairman Brady then said to Rutherford that getting those signatures is very, very hard in parts of the state where the GOP is almost non-existent making it even harder on the lower funded presidential candidates. Rutherford replied that we’d just have to step up our party activism in those areas.

Brady tried to cajole the crowd once again saying, “the only thing we are doing is removing a huge impediment for the smaller campaigns for having to get those signatures. Otherwise the process is the same, here.”

Long-time conservative activist Jack Roeser then rose to speak in favor of the rules change. “We have the most restrictive process in the country,” he told the room as he argued in favor of the change.

Christine Dudley of the 5th District mentioned that whatever rules we have should be flexible enough to meet the needs of our electorate and party. She felt that claims that the new rule would disenfranchise people was incorrect. She felt that the campaigns would be picking their own delegates like they should.

Thinking aloud, Jim Oberweis wondered if the rules change might help latecomers to the presidential contest still be able to compete for delegates in Illinois. Oberweis posited that latecomers to the presidential campaign today don’t have much chance to claim delegates in Illinois because our system takes months and months to satisfy in order to get delegates.

Steve Daglas of the 1st District noted that the winner take all idea was one that New Yorkers found did not work well as it limits participation instead of making it more pervasive. He also noted that with the new proposal the SCC would be tasked with certifying all delegates because the election process would be eliminated. “This is not a power I want to see given to us,” he said to his colleagues.

In fact, a whole parade of speakers came to the mic to complain that few outside the SCC and the most plugged in activists even knew that there was any rules change being proposed. Speaker after speaker said that they had only that day or a day or two before learned that the delegate proposal existed much less had had time to talk it over and debate it with their own committeemen back home.

During this open comments period on the proposal, several committeemen and county chairmen came to the mic and voiced a bit of outrage that they hadn’t been told by state party officials of either the rules change or the meeting, for that matter. There was a wide feeling that this rule was being shoved down everyone’s throat and that it was being pushed too quickly for reasoned discussion.

It went on. Eloise Gerson of Chicago and a woman named Janice (whose last name I didn’t get — update, see below) also agreed that there was no time to discuss this change with the folks back home. Mike Loftus of Lisle Township agreed. And Terri Koyne of Macoupin County said that if Treasurer Dan Rutherford had not sent out an email about the discussion and meeting time, she would never have known there was a meeting being held at all.

During all the comments about what many perceived as a lack of communication from the state party down to the local committeemen, Chairman Brady and Randy Pollard of the GOP County Chairmen Association dismissed the claim saying that a meeting of the county chairmen was held via phone, the state party website had a notice of that night’s SCC meeting, and the proposal itself was out and about since the second week of August. After the meeting, Jim Oberweis told me agreed with Brady and Pollard and demurred from the charge that the party failed to communicate. Oberweis said to me, “We are all here at the meeting, right?”

Still, the feeling was pervasive among the rank and file and the lower committeemen that communication from party leadership was lacking. Many simply felt that we were all brought together for an ill-advised rules change, one brought to the floor far too quickly for the committeemen down the line to have been fully aware of the changes being proposed.

From conversations I had with some of those in attendance, there was a feeling of distrust and many had a suspicion that the SCC had already decided in secret that the whole thing was going to pass regardless. But there was a little surprise for those that felt the rules change was a done deal in a secret back room, SCC deal.

Personally, I feel that some SCC members may have had their minds set against the measure by the many concerned — some angry — comments about the failure of offering enough time to fully debate the rules change.

Chairman Brady then offered a motion to accept the current system as used in 2008 with no changes being made. This was accepted unanimously.

While the meeting started to get a tad heated at the end, for the most part it was a very civil debate. I do think the whole episode does show that there is a disconnect between the local committeemen and their bailiwick and the party powers that be and theirs. The rank and file seemed to feel as if they are on the outside looking in at party leaders. This should serve as a wake up call to the SCC.

In other business was the tabling of a resolution being brought by Republican National Hispanic Assembly member Angel Garcia. For those unaware there is a lot of intrigue going on in the RNHA these days as rival factions have been battling for control of the state chapter and national agenda for Republican Hispanics. Just prior to the SCC meeting the national governing body of the RHNA revoked the Illinois state chapter’s charter leaving Mr. Garcia without an organization to represent.

The two sides have been fighting over the direction of the RHNA for some time and this is another chapter in the in-fighting going on there. What will come of this imbroglio is anyone’s guess and remains in the future.

So, the meeting was adjourned at about 7PM. Me, I went to White Castles. Seemed like a good time to get a “crave” on.

Above I noted that I did not catch the name of one of the women that spoke at the meeting. It turned out to be Janet Silosky who is also running for State Rep for the 98th District.(Here is an old campaign website when she ran for committeeman)