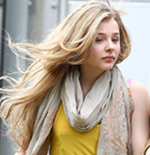 It looks like Hollywood has not learned the lesson that a graphic rape of a teen girl is not the best recipe for box office sales as this year, yet another rape fantasy film has emerged from the muck and mire of Hollywood in the hopes to assault audiences everywhere.

You may remember back in 2007 when upcoming actress, then a 13-year-old Dakota Fanning, starred in Hounddog, a film in which her character was raped. When the film debuted at the Sundance Film Festival, the rape scene elicited actual boos from the audience. Still, the scene was not explicit and the rape itself was not shown on film.

This time, however, Hollywood went from the implied rape of a 13-year-old Dakota Fanning, to the graphic rape, bondage, and enslavement of a 13-year-old Chloe Grace Moretz in a new film hitting Sundance titled Hick.

You may remember that Miss Moretz was recently in another controversial film as the foul-mouthed, bad guy-killing character named Hit Girl in the comic book-styled movie Kick Ass (2010).

The film Hick, from a book by the same name written by Andrea Portes, follows the life of 13-year-old girl named Luli, a runaway from negligent parents, as she sets out alone for Las Vegas from her Nebraska hometown.

From recent reviews, it is almost a schizophrenic film starting out as a nice portrait of a precocious teen girl in a coming of age story in the style of Juno. Naturally, this 13-year-old seems older than her age.

One reviewer, however was disturbed by how the girl is constantly sexualized visually. With long flowing, golden hair, and skimpy clothing, Luli is filmed as an object of desire all too often. Also, for at least half the movie, Luli flirts with a 26-year-old character named Eddie giving the film a “will they/won’t they get together” theme.

But then story goes from road picture to violent rape fantasy as ne’er do well Eddie in his black cowboy hat eventually drags her off into a cornfield and violently rapes the young girl. Worse, in the subsequent scene she awakes tied to a bed and told that she is to be the monster’s sex toy.

In the book, this creep not only rapes the girl and imprisons her but pimps her out to his equally scummy buddies as a prostitute repeating the rape a dozen times over. I am not sure if the movie carries this story line through in this case, but regardless what we have here is a violent, dark, and exploitative story line masked by a wistful coming of age story.

These are the sorts of stories that do nothing to enlighten or entertain. They cater to the worst, darkest impulses in us all. Unfortunately, it is these dark impulses that Hollywood returns to all too often. Hick has not yet found a distributor and let’s hope it doesn’t.