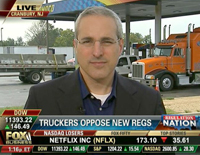 Much of what you eat, wear, read, play with, drive, and ride gets to your hometown store via a truck of some kind so the open road trucking industry — as well as local, short distance haulers — is a vital link between all of us and the necessities of life. That is why the constant wave of new regulations that roll over truckers like a killer tidal wave is something to which we all need to pay more attention. So, it looks like Fox Business Network’s Adam Shapiro has been doing some of that attention paying.

These jobs killing regulations need to be reassessed because small business owners — called owner-operators — are being priced right out of the business leaving only the giant trucking firms that can afford to pay all the fees, licenses, tags, and stickers while at the same time being able to have the legal advice to satisfy all the mounds of regulations as well as the yearly and multitudinous changes in same that happen every single year.

Remembering that President Obama keeps claiming that he wants to eliminate regulations, even though his own regulatory powers grow by the day, regulations in this country are killing businesses and smothering any possible recovery. Nearly every day we hear of a new major regulation the Obama administration wants to add to the pile.

Worse, every single year there are hundreds of new regulations and thousands of alterations to regulations that we never hear about, changes that affect nearly every American business. Changes that ultimately make our lives more difficult and costly, changes that cost jobs.

Fox Business Network has been doing a special entitled Regulation Nation that explores the litany of regulations that inhibit the stimulation of the economy and one of the particular issues has been those regulations that affect the trucking industry.

To my query about the show, FBN’s SHapiro sent me some info about what the special focuses on.

The Department of Transportation Federal Motor Carrier Safety Administration (FMCSA) may soon adopt new regulations changing the hours of service for truckers. The proposed changes may cut the total hours a trucker can drive from 11 to 10 hours and require two consecutive off duty periods from midnight to 6:00am before a driver can restart their weekly driving timetable. It may sound like good regulation but the American Trucking Association (ATA) says it’s bad and will “result in reduced wages for hundreds of thousands of drivers, significant administrative and efficiency costs for trucking companies, and most importantly, billions of dollars in lost productivity.” The most recent data from FMCSA shows that between 1999 and 2009 the number of large trucks involved in fatal crashes has declined by 35 percent. In 2008 the number of fatal crashes fell by 21 percent, the largest annual decline since records have been kept and during a period when the hours of service rules had already been changed and resembled the current proposal. But highway safety advocates say there is no way to determine if the previous changes in the rule had any positive or negative impact on the crash data and that the bad economy may just as easily be a reason. One of those highway safety advocacy groups, the Advocates for Highway and Auto Safety was part of a law suit in 2003 which lead to the current hour of service rules and the proposed changes. The group’s Vice President Henry Jasny says, “The issue of fatigue is not readily reflected in data collected by police because after a crash a truck driver is full of adrenaline and doesn’t act tired…the only way to ensure drivers are not tired is to give them more time off duty to rest.” But the ATA disagrees and says the decline in crashes directly correlates with the current hour of service rules, “In other words, carrier compliance with the current rules is directly linked to safer trucking operations.”

FBN’s Adam Shapiro recently visited a truck stop and talked to some of the truckers about what they face on a daily basis and how it negatively affects their livelihood.

You can see some of the past episodes of this special at the Fox Business Video Page.