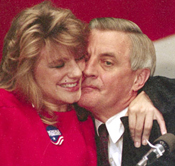 Eleanor Mondale, the precocious daughter of Vie President Walter Mondale, passed away at her home in Minnesota. Mondale, aged 51, had been diagnosed with brain cancer in 2005 and finally succumbed to the illness.

Mondale made a name for herself in radio and TV after her father’s failed 1984 run for the White House against Ronald Reagan. But she was also the talk of the town, if you will before she launched her entertainment career.

She was a known “party girl” and again became notorious after her fling with rocker Warren Zevon was revealed in a book by Zevon’s widow published in 2007.

Mondale had several parts in TV shows, became an entertainment reporter, and went on to become a successful radio personality in Minnesota. Her radio career touched Chicago briefly in 1986 when she did a stint on WGN-720 (AM)

She was diagnosed with brain cancer in 2005 but had thought that the cancer had gone a year later. But by 2008 the cancer that eventually took her life had returned.