An elementary school in Fort Collins, Colorado came under fire last week for having placed in the school a smaller sized Saudi Arabian flag in a higher, more prominent position that the flag of the United States. Many locals called this a disrespectful display and even wondered if it was part of some effort at anti-American indoctrination. 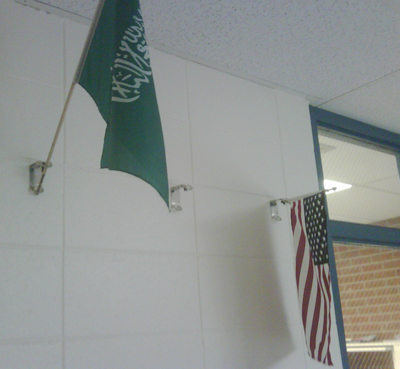 Colorado blog Greeley Report first noted the flag controversy by posting a photograph of the lobby display calling the positioning of the two flags “an outrage” and saying how the disrespect to the U.S. flag “shows how the indoctrination process continues without your consent or knowledge.”

Bauder Elementary School Principal, Brian Carpenter, told the Greeley Gazette that this was simply a careless mistake. Not only was nothing meant by the placement of the flags, but the matter was quickly corrected to have the U.S. flag hang higher than the others in the lobby.

But what was the Saudi flag even doing in the school in the first place?

There doesn’t seem to be any reason to imagine that this school had any intention of demoting the importance of Old Glory, especially to give the Saudi flag a place of higher prominence. I see no reason to think that the school is engaging in any direct anti-Americanism.

However, there is still a problem here. The whole reason these flags of other nations were there in the first place is something that as a culture we should stop doing. This whole idiotic celebration of everyone’s “heritage” is a dangerous and self-destructive habit that we should end forthwith.

Over the last few years many European nations like France and England have seen their cities burning to the ground in riots caused by the same idiotic indulgence in multiculturalism as being displayed in the school in Fort Collins.

There is absolutely no reason whatever to have flags of other nations hanging in an elementary school. We are Americans, not Saudis or Mexicans. The more we push this unhealthy focus on distant heritage in the classroom the more we risk diluting any connection our young citizens have with this country.

There is nothing wrong with being interested in genealogy and family history, of course. But these interests should be the subject of things better done at home or at the very least if it has to be a part of the school curriculum as a single classroom project that can be done once and then left behind while other subjects are pursued.

There should be no large, permanent displays of other nation’s flags and other nationalities in our schools.
____________
“The only end of writing is to enable the reader better to enjoy life, or better to endure it.”
–Samuel Johnson

Warner Todd Huston is a Chicago based freelance writer. He has been writing opinion editorials and social criticism since early 2001 and before that he wrote articles on U.S. history for several small American magazines. His political columns are featured on many websites such as Andrew Breitbart’s BigGovernment.com, BigHollywood.com, and BigJournalism.com, as well as RightWingNews.com, RightPundits.com, CanadaFreePress.com, StoptheACLU.com, AmericanDaily.com, among many, many others. Mr. Huston is also endlessly amused that one of his articles formed the basis of an article in Germany’s Der Spiegel Magazine in 2008.