Over 100 supporters march with candidate in Buffalo Grove parade

Touching off what will likely be a referendum on last winter’s state income tax hike; Highland Park pediatrician Arie Friedman announced his candidacy for the State Senate as over 100 supporters gathered about him just before stepping off as Team Friedman in the Buffalo Grove Labor Day weekend parade. 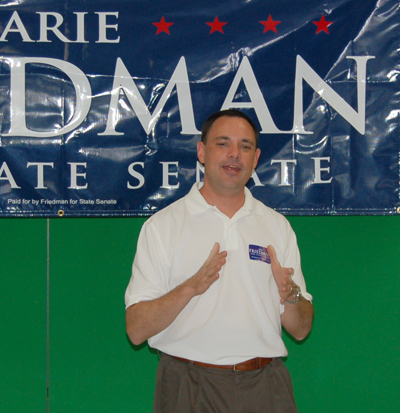 Friedman, 45, is the only announced Republican candidate. West Deerfield Township Supervisor Julie Morrison of Deerfield, a former Republican, is the sole Democrat to have announced thus far for the 2012 race in the newly drawn 29th District, which takes in the southeast corner of Lake County and parts of Wheeling, Palatine and Northfield Townships in Cook County. Incumbent State Sen. Susan Garrett (D-29th) recently announced her retirement.

In speaking to his volunteers, Friedman called for repeal of the state income tax hike and declared repeal would be a centerpiece issue in his campaign. He noted the income tax increase would be a defining issue between him and Morrison, should she become his opponent after the March 20 primaries.

When Morrison was asked last week about Dr. Friedman’s possible candidacy and his advocacy for repealing the income tax hike, she responded, according to Steve Sadin writing in the Deerfield Patch, “I want to study it more. I want to see what effect if will have and what effect repeal would have.”

But at the Buffalo Grove parade ground, Friedman said, “What could she be waiting for? The numbers are already in! We already know what effect the state income tax repeal is having. Illinois led the country in job loss in the month of July (24,900 – source: USDL Bureau of Labor Statistics), and Illinois workers lost over 56,000 jobs in the six months before that – from the day the tax hike was passed.

“Illinois is going in the wrong direction on taxes, spending and fiscal management,” said Friedman, “and everyone knows it. We have to stop the hemorrhaging of population and jobs from our state, and the only way to do that is to try a new prescription – common-sense adults stepping forward from the private sector to straighten out the mess.

“That is why I am running,” said Friedman, a former Navy helicopter pilot in Desert Storm before entering medical school. “The people of Illinois urgently need to make a change, and my candidacy offers the voters of the 29th Senate District an opportunity to change Springfield.”

Dr Arie Friedman and his wife, Michelle, are the parents of five children. He is a graduate of the University of Chicago and finished at the top of his medical school class at the University of Illinois Medical Center in 1998. Prior to attending medical school, Dr. Friedman served in the United States Navy as a helicopter pilot. During his seven years of active duty, Dr. Friedman flew SH-60B Seahawk helicopters out of Naval Air Station North Island, California, from which he deployed twice, including once to the Persian Gulf as part of Operation Desert Storm.