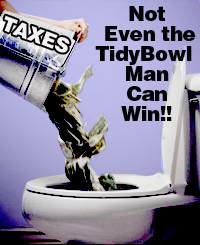 Illinois ended 2010 as the most indebted state in the union. Sadly, not a thing has been done so far in 2011 to make it better. Instead, it will get worse.

As State House News reports, the state rings in at number 50 in the nation’s most broke states.

Illinois owed $37.9 billion more than all of its assets combined, including cash, investments and property, as of July 1, 2010, according to a recent statewide financial audit by the Illinois Auditor General William Holland and Illinois Comptroller Judy Baar Topinka.

So far and just like the states unpaid vendors, even taxpayers expecting refunds got stiffed because the state somehow forgot to put $1.4 billion in the refund fund for taxpayers that overpaid their taxes. Now those awaiting refunds will have to wait.

The report notes that things would have been even worse if it weren’t for the $3 billion in cash brought into the state by Obama’s stimulus. But, just think what that means? It means that in Illinois the so-called stimulus did not go where it was supposed to go. Instead of “stimulating” the economy like Democrats said it was to do, in Illinois the stimulus just went to make up for the money the state didn’t have to pay its bills!

The state’s black hole of a budget is so bad that it is $10 billion worse than it’s closest competitor, New Jersey — the state that came in as the 49th most indebted state.

It’s all so bad that even the leftist Illinois think tank the Paul Simon Public Policy Institute at Southern Illinois University is warning that cuts in spending is necessary. And when even a left-wing group like that is calling for cuts, you know it’s bad.

One of the state’s biggest problems is the state’s public employee unions. Many of these jobs need to be eliminated and their pensions need to be somehow revamped — if not also eliminated. Benefits need to be chopped down, too. But there is no political will to do this and it will do nothing but get worse.

Unfortunately, it won’t get better until it gets far, far worse. As the Statehouse News notes, when the economy does start coming back (once the nation gets over Obamaism) Illinois will b one of the last to feel the growth. In fact, it’s so bad that Illinois will be worse than the last to feel the growth as the nation surges ahead leaving the worst of the worst behind for far longer than everyone else.

Sadly, neither party is offering solutions and neither party has any leaders that can implement any even if there were any in the offing.