Get Ready for A Laugh Riot New Obama Movie: 'Porkulus II, The Next Fail'

That’s right, folks, if you thought Porkulus one was a laugh a minute, get ready for “Porkulus II: The Next Fail,” a new flick coming soon from Obama/Alinsky/Marx productions.

If you thought the last Porkulus was a failure wait till you see the next one. 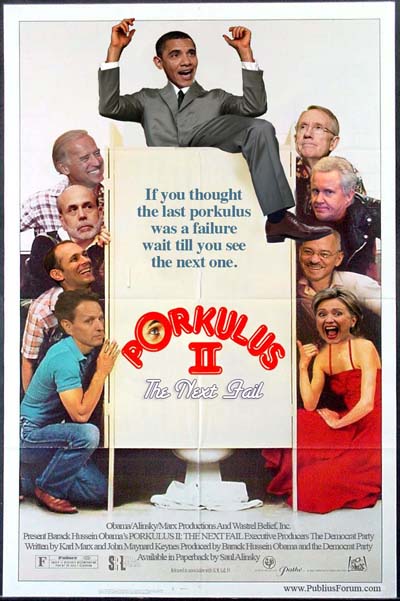 Yes, all your favorites are back. There’s Slow Joe Biden grinning like the useless jackal he is, Harry “This War is Lost” Reid, Timmy “Tax Cheat” Geithner, Hilary Clinton, Reverend Jeremiah “God Damn America” Wright, Jeffery “What Jobs?” Immelt, Austan “Sell Out” Goolsbee, Ben “Fed Head” Bernanke, and a host of other halfwits and clowns all meant to tickle your funny bone and rob you blind.

Remember the days when you had to actually pay to see a movie? Well, not this time! THIS movie is FREE we are told. Why, just show up and we’ll let you in gratis. But if you don’t want to see the movie, well at a later date there is a fine, some jail time, and the kind of harassment that even Muamar Gaddhafi would be ashamed of employing.

This is a production of Obama/Alinsky/Marx Productions and Wastrel Belief, Inc. Present Barack Hussein Obama’s PORKULUS II: THE NEXT FAIL executive producers the Democrat Party. Written by Karl Marx and John Maynard Kenyes. Produced by Barack Hussein Obama and the Democrat Party. Available in paperback by Saul Alinsky. A 20th Century Marx film. This movie is rated “F” for abject Failure.