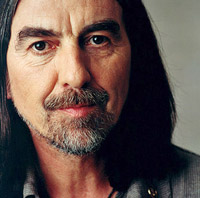 I have to say, I am very interested in this project. It’s a Harrison biopic movie. No, not William Henry Harrison. Not even Benjamin Harrison. It’s George Harrison, the Beatle.

I have always been more fascinated by “the quiet Beatle,” George Harrison, than the others. I also like his music far better than John Lennon’s. I have most of Harrison’s solo albums, but not many of John’s solo work.

Harrison’s music was much more complex than both Lennon’s and McCartney’s, I have always thought. And Harrison developed a very distinctive sound, too. His last album, “Brainwashed” is very fun.

Of course, I found his dabbling in eastern religions a bit silly and hard to take. But he seemed sincere in his search for “truth” and that took the edge off his dalliance as far as I am concerned. Unlike many other rock stars, he seemed really interested in his efforts to understand the nature of things. He didn’t seem to be make a showy go at it so that he’d seem “kewel” or trendy. I think he was misguided, certainly, but at least he wasn’t a fakir. He really meant it all it appeared.

Anyway, I really liked his music post Beetles, which is more than I can say for Lennon.

I also respect the fact that Harrison led his life in a reserved manner and never tried to make a spectacle of himself, which is also more than I can say for Lennon.

Finally, he funded Monty Python movies! What’s not to love about that?

The film takes viewers on a “musical and spiritual” journey of Harrison’s life via the moving and unique vision of Scorsese. Take a look at the trailer and official synopsis below:

Martin Scorsese traces Harrison’s life from his musical beginnings in Liverpool through his life as a musician, a seeker, a philanthropist and a filmmaker, weaving together interviews with Harrison and his closest friends, performances, home movies and photographs. Much of the material in the film has never been seen or heard before. The result is a rare glimpse into the mind and soul of one of the most talented artists of his generation and a profoundly intimate and affecting work of cinema.