Chicago's Marilyn Monroe Stature: From the Windy City to the Tacky City 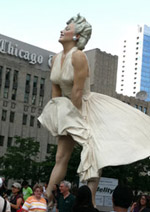 I finally made it downtown to see the absurd Marilyn Monroe statue that sits in Pioneer Court, the public mall area next to Tribune Tower on Michigan Avenue near the Chicago River. I have to say it is as tacky in person as it seems in photos. Moreso, maybe.

The paean to Marilyn Monroe’s famous sewer grate scene in the movie “The Seven Year Itch” went up in early July. It was created by New Jersey artist Seward Johnson and portrays Monroe as she stood above the sewer grate, dress flying in the air, face in that patented Monroe look of ecstasy.

To me, however, it resembles not so much a sculpture as it does a cheap kewpie doll-like, carnival prize. Unfortunately, it isn’t kewpie doll sized but is so big at 26-feet-tall that you can’t simply dismiss it as mere kitsch.

It is nothing short of a gigantic pile of tackiness in the middle of the Windy City. But the sponsors call it “art,” nonetheless.

“We do the public art because (Zeller Realty Group president) Paul Zeller is really committed to providing art to the general public,” said Melissa Farrell, executive assistant at Zeller Realty Group, for which she oversees artwork both in Pioneer Court and a handful of indoor locations.

“(Zeller) likes to bring in things that cause a conversation,” Farrell said. “They might be controversial, but he likes art that makes people think.”

The only thing “controversial” about this thing is calling it “art.” It isn’t. In fact, it doesn’t even do a good job resembling the queen of sex appeal in but the most general of ways. 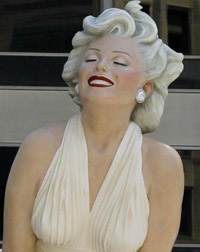 Here is a closer look at the face.

As you can see, it is generally Monroeish, but is really more of a cartoon than a life sculpture. Like I said, the whole thing is more like a caricature than a sculpture. It is simply tacky as all get out.

Critics complained that this was just another effort to bring tourists to the area and lacked any meaning as art. Any check of Pioneer Court would make that claim hard to deny, for sure. Tourists swarm the place at all hours snapping their photos and laughing at looking up at Monroe’s underwear-clad rear-end.

If that isn’t tacky, what is? 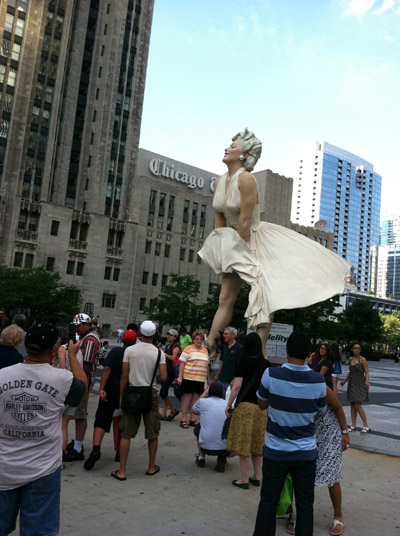 And tacky as heck, too.

Now, you can’t peg me as one of those hoity-toity, pin-headed art purists. In fact, I generally think that your Jackson Pollock types are just as silly to claim that they love “art,” as I do folks that think these tacky pop culture pieces made by Seward Johnson qualify for the title. Actually, let me reconsider. I might give Johnson the edge over the presumptuousness of the “mod-ren” art crowd for whose work is a better contender for being called art. But, I have to agree with the pin-head set that have said that this Chicago Monroe statue is just another bad tourist trap. Of course they are right, at least in this instance.

Anyway, it is an ugly, kitschy, oversized, spectacle. I give it thumbs down.

But it sure is good for tourists.