Count Down Begins Until We Are Rid of Ron Paul 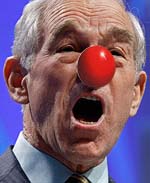 “Big News,” folks. Ron Paul has decided to retire from his 18-term House seat to “focus” on his next futile run for the GOP nomination for the presidency.

This morning, on his Facebook page, Rep. Paul made the following announcement:

Big news! I have decided not to seek re-election for my House seat in 2012 and will focus all of my energy winning the Presidency. My hometown newspaper The Facts will be running the exclusive story very shortly.

Paul has decided that his run for the White House needs to take precedent… or he just really wants to retire. He is 75-years-old, after all. He likely realizes that he will come no closer to winning the nomination than he ever has before. I mean, can he be so stupid as to imagine he really has a shot?

I’d say we are safe to start writing the obit for Paul’s career, so what is the Paul legacy? A hit-and-miss libertarianism, constant attacks on Jews and the Federal Reserve, complaints about federal spending, while culling billions of federal tax dollars in earmarks for his constituents in Texas. But no real lasting legacy, I’d say.

I won’t miss his half-informed fanboys who have for at least ten years descended on nearly every Republican or conservative conference stuffing straw poll ballot boxes with votes all paid for by Paul’s multi-million dollar campaign war chest. I also won’t miss his fans and their overly confrontational attitudes and ignorant, raucous behavior. Most especially, I won’t miss their anti-Semitism and hatred for Jews.

The cranky uncle of the GOP is about to fade off into the sunset, folks. About time, too.