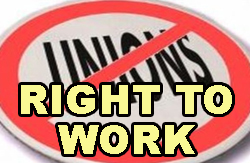 Barack Obama’s interference in the business operations of Boeing new Dreamliner manufacturing project will likely cause thousands of workers in South Carolina to lose their jobs. Because of this, one Palmetto State worker is suing the federal government for its part in his probable future job loss.

This is a story about Obama’s status as the top bought-and-paid-for union hack in the country and how he is attempting to use his powers to wield regulations as a tool to punish an American business for wanting to open a new manufacturing plant in South Carolina all because the president feels that a union will be hurt in the process of the creation of thousands of new jobs.

As it happens, airplane manufacturer Boeing wants to open a new manufacturing plant in South Carolina for its new Dreamliner plane because the manufacturer had been having so many union-caused troubles in its Washington State plant. Once the workers in South Carolina found out that Boeing intended to open a new plant in their state they held a meeting and decided to boot out the International Association of Machinists (IAM) union so as to make their fellow workers even more attractive to Boeing to entice the venture to completion in South Carolina. These workers knew that the union would hamper the efforts to create new jobs for South Carolinians.

This caused the union to run to its bought-and-paid-for commander in chief in Washington D.C. To help the union, Obama directed his National Labor Relations Board (NLRB) to inform Boeing that it would not be allowed to build its new business in South Carolina simply because the IAM had lost its power over the workers there.

As a result of this unprecedented interference by a federal regulatory body under the thumb of the most anti-business president in American history, the National Right to Work Foundation’s attorneys have filed suit for Boeing employee Dennis Murray, the man who led the effort to toss oust the machinist’s union in his Charleston plant.

For his part, Obama and his NLRB have been claiming that Boeing’s new plant in South Carolina would cost the country thousands of jobs. But this Friday, National Labor Relations Board’s acting general counsel Lafe Solomon could not provide a House Oversight Committee hearing any proof that there would be any job loss.

What is clear here is that the federal government had no facts at its disposal to base its action against Boeing on in the first place. The NLRB moved forward on its action with no facts and no solid finds but only with a base assumption it made no effort to confirm beforehand. Obama’s NLRB went forward with only one goal: giving unions a payoff. And remembering that unions paid Obama millions during his political career, the whole thing smacks of quid pro quo and not legitimate government interests.