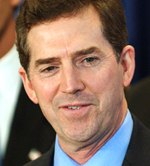 Senator Jim DeMint (R, SC) wants some answers as to why Obama’s National Labor Relations Board (NLRB) thinks it has the power to tell American businesses where they are allowed to build their newest manufacturing facilities.

On June 6 Senator DeMint’s office filed a freedom of information request demanding documents connected to the NLRBs decisions to try to force Boeing not to open a new manufacturing plant it planned to open in South Carolina.

DeMint is concerned about the outside influence of unions in this case. On his website he notes that in the same month that the NLRB began attacking Boeing the International Association of Machinists was bragging in its newsletters about the political influence it had bought with its campaign contributions.

In the same month that the NLRB decision on the Boeing case was made public, the IAM bragged to its members in their April newsletter that political contributions made by the union’s political action committee (PAC) “gains your Union access to officials, which is critical to get our issues addressed and ensure our input is heard.”

The Senator wants to know if these donations by unions created a “pay to play” scenario with the NLRBs attempt to stall Boeing’s new start up in South Carolina, a state well known as a right to work state where unions have far less influence than Washington state where Boeing has its current plant.

Whether there was provable pay to play or not, the fact is that this move by Obama’s regulatory arm is an unheard of, outrageous attempt to oppress the freedom of an American business to operate in any American state in which it wants to operate. Further, it is plain that the sole reason Obama’s regulatory agency is doing this is to benefit big Labor — one of Obama’s biggest donors.