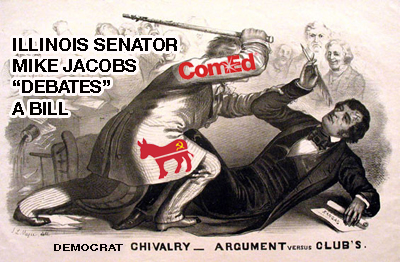 Apparently, when anyone dares question an Illinois Democrat he gets violent… even if he’s a state senator and he’s right on the floor of the senate itself.

51st District Senator Kyle McCarter (R- Lebanon) objected during the debate today about the ComEd utility legislation the Democrats were pushing. His fellow Senator, the 36th District’s Senator Mike Jacobs (D, Moline), was pushing a vote on the bill without telling everyone present that his father, former senator Denny Jacobs, was a lobbyist for ComEd, the company that would benefit most from the bill. Sen. McCarter rose to his feet and calmly alerted the house to the fact that not only was Senator Jacobs’ father a lobbyist for ComEd but that the Democrat Party was the largest recipient of ComEd’s campaign cash.

Naturally, with their great majority, the Democrats were easily able to get the ComEd payoff passed through the chamber. McCarter imagined the situation was past and he went on to offer a new bill of his own.

As McCarter proposed his bill, Senator Jacobs came over and stood before McCarter as he spoke. Once McCarter’s immediate business ended, Democrat Jacobs got mouthy and then punched McCarter in the chest.

Several other senators stepped in to break Jacobs away from McCarter.

McCarter says that he filed a police report on the matter.

Well, folks, this is the sort of thuggishness to which Illinois Democrats are prone. Welcome to the Land of Thugs.