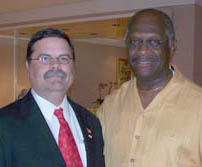 Presidential candidate Herman Cain (R) recently spoke with FOX Business Network’s (FBN) Neil Cavuto about the dispute between the National Labor Relations Board (NLRB) and Boeing and its impact on the United States economy. Cain said what the NLRB is trying to do keeping Boeing out of Charleston is “a direct assault on the free market system” and he hopes Boeing will “fight it all the way to the Supreme Court if that’s what they have to do.” Cain went on to say it is “uncertainty” that is preventing the U.S. economy from adding jobs in the “private sector” which must be “the engine” for economic growth and it is issues like the NLRB/Boeing dispute that are “killing the engine.”

Cain says that the reason business aren’t hiring is because of the uncertainty that Obama’s policies have visited upon the nation. The “uncertainty about the impact of Obamacare” chief among them. “We don’t know what the tax rates are going to be at the end of 2013. This economy is stalled. This economy is like a train stuck on the tracks. You have a boxcar full of 15 million people who don’t have jobs, you have a boxcar of businesses that are hanging on. You have a caboose and no engine. They keep feeding the caboose. The caboose can’t pull the train. The private sector has to be the engine. Everything that they are doing, including this National Labor Relations Board issue, is killing the engine.”

Cain is also incredulous at Obama’s National Labor Relations Board (NLRB) for its decision to attack Boeing attempting to prevent the company from building new manufacturing plants in South Carolina.

“What’s at stake is a direct assault on the free market system,” Cain said. “What the National Relations Labor Board is doing is an attack on free enterprise and that is exactly what we don’t need. I hope that Boeing hangs in there and they do fight it all the way to the Supreme Court if that’s what they have to do.”

Cain echoed what he said on the state of the recent Republican debate on the charge that he is and the other GOP candidates are anti-union. “I am pro workers and I am pro right to work,” he told Fox Business Network. “I am pro free market. They are trying to bring states and businesses down. I don’t agree with it and most of the American people, they don’t agree with it either.”

As to what his own relations with NLRB would be if he were to become President, Cain said that he would make sure that free enterprise would be it goal.

“First I would give direction. We want to help free enterprise in this country, not hurt it. Rather than being a barrier to free market development. Be an assistance. In fact, that would be my message to all of government if I were to become president. Lower corporate tax rates because we’re the only country in the world that has not done it in fifteen years. We should take capital tax gains to zero. Here’s the most important part: make the rates permanent. That’s the only way we’re going to be able to get this economy growing at the growth rate that it has the potential to grow.”

Cain also thinks that tax cuts cannot “cost money” to the federal government. “The American people have been lied to about tax rates costing money,” he said. “I would do two things. I would add a real payroll tax holiday. It wouldn’t be permanent. I’d do it for a year. You get serious about cutting spending.”