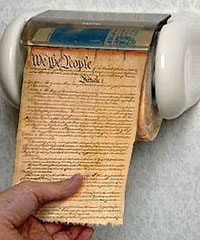 Indiana’s highest court has turned against our rights and the Constitution of the United States. The Supreme Court of Indiana has just decided that the Fourth Amendment of the U.S. Constitution does not apply to the citizens of Indiana.

Blogger Bruce McQuain said this appalling incident in Indiana is an example of, “why you have to constantly protect your rights daily from attacks from within,” and boy is he right. NorthwestIndiana.com pinpoints the problem perfectly.

Overturning a common law dating back to the English Magna Carta of 1215, the Indiana Supreme Court ruled Thursday that Hoosiers have no right to resist unlawful police entry into their homes.

The Supreme Court has decided that the right to be safe in one’s own home is not as important as the state being allowed to batter down people’s doors at will. Justice Steven David averred that there are enough protections of homeowners after they are accosted illicitly by police, after they’ve been arrested and possibly physically harmed, and after the state has caused them to spend untold thousands of dollars on their own bail and defense in the courts.

“We believe … a right to resist an unlawful police entry into a home is against public policy and is incompatible with modern Fourth Amendment jurisprudence,” David said. “We also find that allowing resistance unnecessarily escalates the level of violence and therefore the risk of injuries to all parties involved without preventing the arrest.”

This turns natural rights on its head and alters the basic compact between citizen and government in the USA. It takes us from an “innocent until proven guilty” premise to one where citizens have no rights at all unless the state deigns to allow them.

Now, the argument that the anti-constitutionalists make almost sounds sensible at first blush. This ruling, they say, is merely meant to prevent any chance that the actions of a homeowner in a given situation will “escalate the level of violence.” If homeowners sit meekly by and allow police to illegally enter their home, why the level of violence won’t grow. We need to protect the lives of our police, right?

The problem is that with a rule such as this in place, the police have no real reason to be sure that they are in the right when battering down a homeowner’s door in the first place. Freed from this onerous requirement to be 100% sure, they will find themselves battering down doors with little provocation because, hey, THEY are covered by the law from being wrong. THEY don’t need to be sure that the home they are invading is the right home, one inhabited by real criminals. Why, it can all be cleared up later, right? So the citizen can just shut up, sit down, and take this violation of his rights.

That’s right, you, the citizen, can just shut up, taste the cop’s boot heels, and maybe (if you are lucky) some judge down the line might agree with you that your rights were violated and, gosh, they need to mumble an apology to you sometime.

As McQuain said, this is proof of why we need to zealously protect our rights and fight for them every day.

It is also proof that our legal system is badly breaking down. It is proof of yet another thing, too. It is proof that these “judges” have no fear of the people. The Indiana Supreme Court judges that voted in support of this outrageous decision should all be thrown off the bench if not by outright impeachment, then at least in the next election.

But, I’d rather see impeachment, as opposed to election turnovers. Our elected politicians need to begin to systematically eliminate judges of this sort who have turned against the US Constitution. These people need to fear for their jobs. Impeachment of these un-American monsters has never been used enough and we should start doing it ASAP.

When even a red state such as Indiana starts turning against our natural rights, we know our governments have turned against we the people.