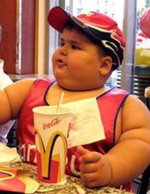 All across the web today (even in England, for cripes sakes) a story about an Illinois lawmaker who supposedly wants to remove the tax exemption of parents of fat kids is making the rounds. It is being presented as a serious idea. Unfortunately for the Old Media this story is being misreported. The story is simply not true.

As the story is being (mis)reported, Republican State Senator Shane Cultra of Onarga, Illinois, said on the House floor that the parents of obese kids should lose their tax exemption because obesity is rampant in Illinois.

Senator Cultra’s comment came during a debate on a policy proposition by the Senate Public Health Committee in Springfield that sugary drinks should be taxed at a penny an ounce. What this is supposed to do for obesity is anybody’s guess. During this debate Cultra, known for his dry sense of humor, said that maybe we should hold individual parents accountable for their fat kids. He offhandedly said that these recalcitrant parents should have their tax exemptions removed.

Cultra was not being serious. It was a pointed remark about government intrusion into our lives not a real policy suggestion.

Yet, from there the news reporters went wild. Of course, not one reporter bothered to interview Cultra further about his remarks to see what he actually meant. On WLS radio’s Cisco Cotto Show, Cultra said that his words were “tongue in cheek” and were taken out of context.

I said that parents should be held responsible for childhood obesity, they should at least be playing a role in this. And my words were taken completely out of context and they were totally tongue in cheek.

Cultra said that apparently it isn’t a good idea to try and be wry in government these days and that in retrospect he shouldn’t have said it that way.

Here, though, is the point, this whole story could have been easily cleared up by a quick question to Sen. Cultra as soon as he said it. Instead, the media went with the story without clarifying it.

Of course, some can easily say that this is Cultra backtracking and playing the “just joking” defense. Some may say that Cultra was serious when he originally proposed this idiotic removal of tax exemptions for parents of fat kids and the bad publicity has caused him to reverse his position.

But the fact is that during the debate the Republicans were not in agreement with the sugary drink tax. State Sen. Dave Syverson (R-Rockford) was another member saying that the the tax was ineffective.

“It seems like we just, we go after the low-hanging fruit, where its easy to get,” said state Sen. Dave Syverson, R-Rockford. He said the state needs to form a comprehensive plan to address physical fitness and disease prevention, rather than taking aim at sugary drinks.

The tenor of the debate was that Republicans were mocking the tax and saying it would do nothing to solve childhood obesity. In light of this, it is easy to understand that Cultra was merely being sarcastic with his tax exemption removal proposal.

To back up the idea that Cultra was not seriously proposing this idea we can also note that he’s introduced no legislation to remove the tax exemptions nor begun any process to do so.

This misreported story is a perfect example of how bad our Old Media establishment really is. They look for sensation, not truth. Cultra’s joke was turned into “news” by reporters that didn’t bother to discover the real context of the remarks. Makes one wonder how often this happens, doesn’t it?