If You're Democrat And Constantly Lose Elections, Get a State Job Anyway 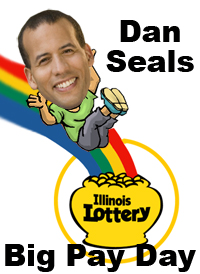 Feeling low, spunky? Feeling sad because you lose election after election, my friend? Crying because, no matter how hard you try, those idiot voters won’t put you in office where you’re sure you belong, donkey-boy? Well, fear not, sparkey. YOU are a Democrat and in THIS state you always win, even when you lose. In this state, as a Democrat, you get to feed at the public trough, paid by the taxpayers whether you can win election or not.

So, welcome to the hind teat of government, Dan Seals. Oh, you are a major loser, but, gosh, you are on top of the world now because the Illinois Democrat Party has rewarded you with a sinecure from the state. As the Chicago Trib’s Clout Street reports…

Democrat Dan Seals, a three-time losing congressional candidate on the North Shore, is getting a state job.

Democratic Gov. Pat Quinn today hired Seals as his $121,090-a-year assistant director of the Department of Commerce and Economic Opportunity. He starts Tuesday.

Yp, even loser Democrats come out with fistsfulls of taxpayer’s cash in this corrupt state.