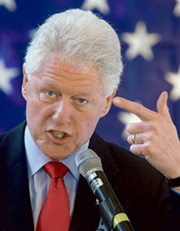 Bill Clinton wants the government to “correct” what you say on the Internet, folks. Should the government listen to the former panderer-in-chief, we’ll go from Big Brother to Big Bubba on the ol’ Internet tubes.

Bubba is not happy with what he claims is the “misinformation” on the Internet and he wants the force of government to stop it all. Politico is reporting that Clinton makes the proposal in an upcoming CNBC interview saying, “It would be a legitimate thing to do.”

No, Bubba, it would not. Clinton says that the idea of having a government agency that “corrects” the “misinformation” on the Internet would be “independent” of government so it isn’t a traditional government agency. This, he feels would make it all A-OK with those fearing Big Brother government ministries of propaganda.

Again, Bubba, it would not.

How it is even possible to have an “independent federal agency,” is anyone’s guess. After all, the second such an agency came into being it would be controlled by the political body of Congress or a presidential administration. There is no way such an agency could ever be “independent.” In fact, even the appearance of impropriety is enough to discredit such an effort.

“That is, it would be like, I don’t know, National Public Radio or BBC or something like that, except it would have to be really independent and they would not express opinions, and their mandate would be narrowly confined to identifying relevant factual errors” he said. “And also, they would also have to have citations so that they could be checked in case they made a mistake. Somebody needs to be doing it, and maybe it’s a worthy expenditure of taxpayer money.”

But isn’t that the rub? Whose “facts” will be presented? Will those facts be administered under the thumb of a fact-master like Clinton, Mr. “I did not have sex with that woman, Monica,” himself?

Veracity would be a word hard to associate with the BMF, the Bubba Ministry of Facts.

I am not saying there are no such things as facts. Certainly facts are facts, but what people think they can lead to is often ideological, philosophical, or driven by an agenda. There can be several ways to look at a fact and then extrapolate what that fact will “do” once put into play and that, after all, is the nub of politics — it’s even a root of human nature, for that matter. People’s perception of what facts mean will differ.

So, if we have this “independent federal agency” deciding what is the right and proper way to view the facts, what do we have? No less than a ministry of right-thinking. This amounts to propaganda. Period.

There is no official role for government to correct what people write on the Internet. Administrations, presidents, parties, individual politicians, they certainly have the role — no the responsibility — to let people know what facts and policies they think are best, but there is no role in government for any official fact-master.

This whole idea, however, is quite normal for liberals. Their fascist desire to shut people down, to use the mechanism of government to quash ideas liberals are not fond of, is a core belief motivating liberal thinking.

The fact is, it is up to we, the people, to learn the facts. As Benjamin Franklin is reputed to have said exiting the adoption of the U.S. Constitution, we have a republic “if we can keep it.” We are responsible to discerning the facts. It isn’t government’s role to lead us by the nose so.

Big Bubba is not an idea whose time has come. But it isn’t surprising that the anti-liberty left might propose such a thing.