VIDEO: Sluts Appear to be Dumb as Rocks 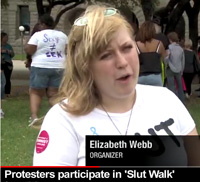 This is the sort of vapidity that gives serious causes a bad name, the sort of stupidity that makes people roll their eyes at every protest because idiotic efforts like this make light of every other effort.

CNN has the “news” — and video — of a protest march in Texas called the Slut Walk, an effort to highlight the idea that the way women dress is no invitation to rape them. The Daily Mail also carried the story and quotes Elizabeth Webb, one of the organizers, as to her purpose. “I know, definitely, it is a controversial name, but we’re trying to reclaim that word and take the power away from that word. And, we want to specify that women dressing like sluts is not how people get raped.”

What? What the heck does “reclaim that word” even mean? What nice women of the past once used the word “slut” as a positive term in order for it to be “reclaimed”?

But it’s all well and good to try to raise the issue that dressing like a slut is not an invitation, but these goofs dressing like “sluts” and parading about the streets are doing nothing but making a spectacle of themselves and does not help raise awareness of rape issues. It just makes them look silly.

It also raises a serious parting question. Are there no pretty sluts in Texas?