Rep. Gutierrez Threatens Not to Support Obama Re-election Over Immigration 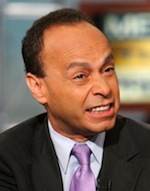 Chicago area Congressman Luis Gutierrez has been harping on the immigration issue for many years and since Obama was elected he has stepped up that activism. Gutierrez wants complete amnesty and an open border and he’s been unhappy with the Obama Administration for its lack of movement on the issue. Now he’s threatening not to support Obama’s 2012 reelection bid over his stymied immigration bill.

Gutierrez has been desperate to get an amnesty bill through Congress but has been stonewalled even by other Democrats. In 2009 he tried it. At that time I interviewed Rep. Brian Billbray who said that Gutierrez was merely setting up the next major wave of illegal immigration with his bill. Last year Gutierrez even tried to shoehorn gay issues into an immigration bill in order to get his failed ideas passed. He pushed hard for the DREAM Act but that failed, too.

Now Gutierrez is trying to stir Americans of Latino heritage to threaten Barack Obama with a lack of support for his 2012 reelection campaign to force the president to sign onto “comprehensive immigration reform,” which is always just another way to say “amnesty.”

“I want to support Barack Obama for reelection,” Gutierrez told MSNBC’s Andrea Mitchell. “But the lack of progress on immigration reform and the lack of action that Barack Obama, our president, has — the discretion he has — is really making that job difficult for me.”

Gutierrez also took this message to the left-wing MSNBC cable newser this week,.