Some people think that marriage is the most absurd institution ever invented by man. But those that think so are ignoring what is truly the most idiotic, paradoxically absurd practice in all of human history: government. Yeah, yeah, necessary evil and all, but still there is nothing that exemplifies human folly better than politics and Washington State has uncorked a doozie for us today.

From coast to coast and all over the world liberals are mindlessly going gaga for green. Anything that smacks of greenism is, with religious fervor, promoted and revered. The electric automobile, for instance, is one of the left’s dream modes of transportation. Pursuant to that dreamy green dream, liberals have made sure that all sort of tax breaks are lavished upon those citizens who dutifully jump up to their necks into the unprofitable and technologically untested world of electric cars. Washington State is no exception to this mania. 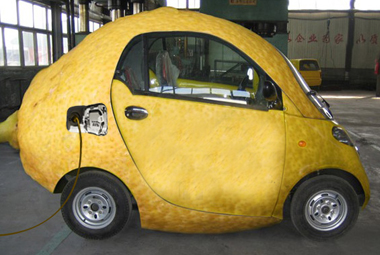 The Associated Press is even a bit snarky about the whole mess.

After years of urging residents to buy fuel-efficient cars and giving them tax breaks to do it, Washington state lawmakers are considering a measure to charge them a $100 annual fee — what would be the nation’s first electric car fee.

Yes, that’s right. After giving electric car buyers tax breaks to waste their money on electric cars, now Washington State wants to raise new taxes on those very same buyers. If that isn’t a bait and switch, what is?

The priests of greenism have their hearts go all aflutter when they imagine that driving green cars will rid the earth of that most evilist of all energies, oil. Gasoline would be unnecessary, we are told, if everyone had energizer bunnies under the hood.

But what does that mean, infrastructure fans? Yes, that’s right, with everyone in electric cars no one is buying gasoline and paying that high gas tax so that cities, counties, states and the federal government have more of our money to waste on vital catfish safety programs and other highly important government matters.

Isn’t it just like government to have brilliant ideas like giving away tax money as a faux stimulus to spur people to do something only for government to then turn around and tax the hell out of it later, hampering the same activity?

The government giveth and the government taketh away. And what is hurt? Everything. People who bought electric cars feel gypped for doing so after being given a bait and switch tax . Those in the future won’t buy them to avoid the tax. And, voila, the action the government wanted to spur is DOA, the industry that the government pretended it was helping out goes down the tubes, and the religious tenets of greenism are left unobserved. Oh, the humanities.

Now Ed Morrissey also reminds us that Washington State has some of the highest gasoline taxes in the country, too, ranking among the top ten highest gas tax rates at 31 cents a gallon. That coupled with the federal gas tax of 18.4 cents lays a tax of 49.5 cents a gallon on gas for Evergreen Staters.

Worse than all that, by some estimates, electric cars are less green than gas powered vehicles in the first place. For one thing the more electric cars there are the more power from coal, nuclear, or natural gas powered utilities will be needed. These sources can, in many instances, be dirtier than gas engines!

So, in the end if the government gets what it initially wanted — everyone in electric cars — our utilities will be pushed beyond its means, and the environment would be worse off than when officials started it all.

See. Government is the most absurd thing ever invented.

**UPDATE**
Electric Car Subsidies :Your Tax Dollars Down The Toilet

While we are looking for places to come up with savings in the federal budget, its time that we looked at cutting the federal subsidies for electric cars. Through its loan and subsidy program, the United States is creating a market for a product where the is no demand. The problem with buying demand is that once the payments go, the demand flies away also.