Obama's Birth Certificate... Can We Get Past This Now? (And is This The End of Trump?)

After a poll that came out that showed that only 38% of Americans thought the president was actually born in the USA, the Obama administration has finally released Obama’s long form birth certificate.

There are several reasons that Obama finally did this and the biggest is that this issue was starting to hurt him politically as the poll above showed. Obama himself was irritated to note that talk of his birth certificate was everywhere in the Old Media detracting from the actual issues of the day. You’ll notice that I’ve never written about this birth certificate issue. The reason was that even if he was born in another country, even if he was illicitly made president, the fact is Obama is president. That being true, there is only one way to get rid of him if he has done something wrong (well, one way besides voting him out): impeachment.

You see, even if we all discovered he really wasn’t an American born citizen, even if he was not eligible to be president, the fact that he got there anyway means that there would have been ONLY one way to get him out. There is no provision in the law to simply vacate or kick out a president except via impeachment. And this is a thing I saw no hope of doing.

I never thought there was any way to get him removed even if he was foreign born. It would have been a giant mess for no ultimate reason.

So, here is the birth certificate as released by the White House: 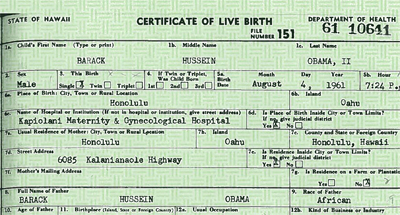 No doubt many conspiracy theorists will still persist in this nonsense, but can we get past this now? Pretty please?

Upside: Perhaps we can be rid of Trump now, too? Pretty please?

Final question: OK, some people are wondering what country this guy was born in, but I wonder what PLANET he’s from!?