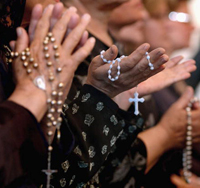 Two Christians were told by Police that they were not allowed to attend an anti-war rally held by a conglomerate of Muslims groups, unions, and Barack Obama’s Organizing for America organization on April 9 in New York City.

About 1,000 people came together at Union Square on Saturday to protest the U.S. military at a rally sponsored by the group Act Now to Stop War and End Racism (ANSWER). James Simpson reports, though, that two Christians were removed from the scene by police because the jackboots claimed that they were “disturbing people.”

According to a counterprotester on the scene, “Besides the sea of them, there were two Christians peacefully preaching about how Jesus died for our sins, and the police told them to leave because they were “disturbing people.”

This event was co-sponsored by the usual, anti-American suspects, of course. A group calling itself the Muslim Peace Coalition USA was one of the sponsors. So was the Islamic Circle of North America. As well as a host of radical, anti-American groups many with ties to The Worker’s World Party socialists.

As Simpson notes, this rally got much favorable TV time in Iran and acted to assist that murderous regime with it’s anti-American propaganda. It’s great that they could aid and abet our enemies, isn’t it?