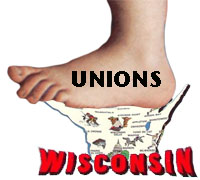 Pursuant to Governor Scott Walker’s new rules, as of Monday the State of Wisconsin is no longer taking union dues out of the paychecks of government workers. The state is also charging more for these employee’s healthcare and pensions.

Even though there is still a question open of a compromised judge’s ruling to set aside the new law, the state is surging forward and implementing it anyway. Because of the legal confusion, some cities are not implementing the law.

The cessation of the state removing union dues will be a great blow to the government unions and will save the state millions of dollars in administrative costs. Like many states, until this ruling Wisconsin automatically deducted union dues from the checks of state employees and deposited that money straight into the union’s bank accounts. This saved the unions millions of dollars because the union did not have to pay for the administration and accounting costs of taking dues. It also made sure that the unions automatically had their dues money given to them without having to rely on the union members to write a check for dues on their own.

This was all a great boon to the unions and to the Democrats that the unions constantly gave campaign contributions to.

Now, unions will be forced to rely on the members to write checks of their own to the unions and this always results in a large drop off in union dues collected by the unions as members find themselves reluctant to pay their dues. This is, of course, why the unions got their bought and paid for Democrat politicians to make laws that forced the state to remove dues from worker’s pay checks in the first place.

But no matter that the cessation of this dues removal practice will hurt the unions — which itself is a good thing — it is a good thing that this practice has stopped for it is ultimately a very un-American practice to force the state to remove dues for the benefit of unions. It is un-American to force the taxpayers to help unions get rich and to foot the administrative costs of the policy.

So, kudos to Scott Walker. Let the unions collect their own dues.