Why Did Rep. Paul Ryan Vote for Destructive Union Giveaway? 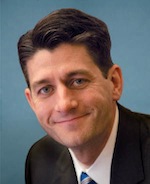 Wisconsin’s Republican Representative Paul Ryan is one of the most well known budget hawks in Congress today. Yet seeming to defy that reputation last week Ryan voted against putting a halt to a budget bloating union giveaway. So what happened?

The amendment was an effort to end project labor agreements on federal construction projects in 2011. This is the sort of thing one would think that every Republican would naturally vote for. Yet the final vote left the tally standing at a tie which meant the measure failed to pass. Twenty-six Republicans voted against this good amendment, Ryan being one of them. Before I get to Ryan’s reason for voting in favor of this union giveaway, we need to explain exactly what a Project Labor Agreement (PLA) is. One of President Obama’s very first moves when he took office was to sign Executive Order number 13502 requiring all federal construction projects to operate under PLAs. A PLA forces all construction projects to operate under union rules and this means that contractors must pay union pay scales and union benefits even if the companies that get the federal work are non-union shops. This severely bloats the costs of federal construction projects and unduly lengthens completion times. Plus it is a boon to unions that get all the benefits while the non-union workers get nothing in return as they are forced to pay union dues even though they will never gain from any union pensions or benefits.

Yes, Ryan voted in favor of this budget busting policy by not voting in favor of Rep. Frank Guinta’s (R, NH) amendment to eliminate the PLAs.

Seems odd, right? So what the heck happened?

Ryan explains that it was an “accident.”

The Washington Times’ Quinn Hillyer asked Ryan what the heck he thought he was doing?

Paul Ryan was one of those 26 “no” votes. I asked him why. Before the question was even half out of my mouth, Ryan said that his vote was just a mistake, and that four or five other GOPers who voted “no” made a similar mistake. He said the amendment was one of a series of dozens of amendments all offered in rapid-fire fashion, with just two minutes to vote on each, and that he had just gotten confused on that vote and thought it was the next amendment in line. He said he would vote to ban PLAs the next time the subject came up.

So we are expected to believe that a veteran lawmaker would make such a ridiculous mistake?

This was Congressman Adam Kinzinger (R, IL) that I was talking about. He only voted for 385 of the budget cuts and he said that the reason was because he never had time to read the amendments to grasp what they were about.

When we are voting on 150 amendments, I was and remain reluctant to vote on amendments where I don’t know what the cuts would do, and why the amendment was produced. I am appreciative of the leadership allowing open debate, however I saw many amendments that were related to personal vendettas or attacks on pet-projects. If I wasn’t 100 percent sure of the effect, I didn’t vote for the amendment.

As I said then, Kinzinger identifies a particular problem with our system as it currently operates. One of the biggest problems with Washington is the lack of due diligence. In fact, there is often no time at all to even practice due diligence. I might suggest he get his staff in high gear checking out these amendments, of course, but I have to agree that I don’t want someone voting for something that they don’t fully understand all the consequences that a “yea” vote will bring.

Obviously far too many amendments are cobbled onto nearly every bill that is pushed through Congress and our representatives often don’t have nearly enough time to read and comprehend all of them before votes are called.

So, what is the solution? Smaller bills with fewer amendments, of course.

Ryan says that if he gets another chance to vote against PLAs he will certainly be sure to do so. As Hillyer says, the GOP leadership should give him and the other Republicans that “accidentally” voted for the union give away a chance to prove that their first vote was a mistake!