The Left's Koch and Bull Story 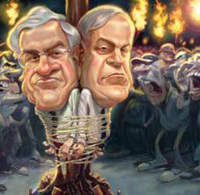 Any more being on the left is little different than being a flat earther or a true believer in UFOs. One may as well accept that sprites infest the woodlands and leprechauns have cornered the gold market as believe in the fantastic conspiracies the left indulges in. The left’s latest flight of fantasy has been its anti-Koch brothers zealotry.

Matthew Continetti has done a great job in a recent issue of the Weekly Standard tearing apart the left’s edge-of-earth theories that the eeeevil Koch brothers are funding the entire right-wing smear machine across the country.

We can liken the left’s wild-eyed Koch conspiracies to the way the Old Media (and this time I mean really old media) reported the exploits of the western outlaw, Jesse James and his gang of bank robbers back in the late 1800s. If one were to believe newspaper reports of the 1870s, the James gang were seen in nearly every southern, midwestern, and near western state for a decade and usually all at the same time — which was a pretty good trick in the days when it took at least a week to get from Chicago to San Francisco. Like those sensationalizing the exploits of Jesse James, the left sees the Koch Brothers under every bed, around every corner, and inside the secret workings of every conservative group of record and a few that don’t even exist. Based on the left’s crazed description of the Koch Brothers’ level of energy, I have to say I want whatever it is they are taking — the Koch Brothers I mean, not the leftists. We know what the lefties are on, after all.

For progressives confused at the heated opposition to their do-gooder agenda, the Kochs became convenient scapegoats. Invoking their name was a way to write off opposition to Obama as the false consciousness of racist rubes stoked by greedy businessmen. In the liberal imagination the Kochs ascended from obscurity to infamy in record time. Starting in the spring of 2009, whenever you turned on MSNBC or clicked on the Huffington Post you’d see the Kochs described in terms more applicable to Lex Luthor and General Zod.

But the fat is that the Koch Brothers are completely upfront and open about their activities. They are not hiding anything. And it is odd that the left would lose its tiny collective mind over two guys that are doing for their side exactly what is happening for the left in the person of George Soros.

The left has benefited by Soros money to the tune of billions over the last decade at least. He has been their sugar daddy for Media Matters, Moveon.org, and dozens of left-wing foundations, think tanks and other NGOs. Arguably, Soros has spent even more to fund left-wing ideas than the Koch’s have for their own side.

So, what’s the deal? Why is the left getting so upset at billionaire financiers funding political activism? They’ve been benefitting from it for years.

The hypocrisy aside, though, it is interesting to watch the left go crazy over David and Charles Koch’s activities, especially when I constantly hear ill-informed lefties calling them the “Kotch” brothers when the name is pronounced “Coke.”

The fact is that the left is prone to the sort of hatemongering and conspiracy theories that bring us tales of “Bilderbergers,” and “Trilatteral Commissions,” not to mention a focus on the Joooos as the root of all evil. The fact is that the left has to have people or peoples to point to as the enemy. They don’t discuss polices, so much as they demonize their opponents.

You are a racist, a homophobe, a haters, a whatever. You are stupid, monstrous, uncaring, evil… blah blah blah.