Senator Ron Johnson on The Budget and the Debate in Wisconsin 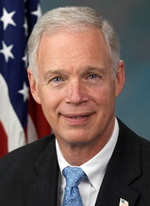 Recently I was part of a conference call with Senator Ron Johnson (R, Wis). Johnson is a member of the GOP wave that over took Washington in the 2010 midterms. In a surprise to many, Johnson defeated long-time Wisconsin Senator, Democrat Russ Feingold.

My first question was one that I have also asked Chief Deputy Whip of the House Peter Roskam. I wondered what Johnson’s position was on the idea of states declaring bankruptcy.

Johnson said that he agrees with Roskam that state should not be allowed to declare bankruptcy. “I totally agree with Peter Roskam. There’s no way the federal government should be called upon to bail out states that have been irresponsible in terms of their spending, that haven’t made the tough choices in their jurisdictions… I would definitely oppose the bailing out of any states” Johnson praised the federal system in that it is set up so that if a few states come running to the federal government for a bailout out we can have 46 other states with a pair of senators each saying, “nah, I don’t think we want to bail that state out.”

Jennifer Rubin then asked Senator Johnson about what was going on back home in Wisconsin. She asked why Gov. Walker and the GOP leadership didn’t separate the fiscal measures and the union provisions earlier and she wondered what the fallout might be for the state’s Republicans.

Johnson replied that the union measures were actually part of the budget problem so it made sense to have the collective bargaining issue “tied together” with the budget issues. “The whole collective bargaining issue,” he said, “was important in terms of bringing fiscal sanity to the state.” He reminded us, of course, that it was the state’s Democrats that forced the policies to be separated because they fled the state. Johnson said it was “pretty disconcerting” to have Democrats claiming that it was Wisconsin’s Republicans that were thwarting democracy. “It’s “pretty disconcerting the level of mob rule and thuggery that’s occurring in Wisconsin. We’re getting word from state senators saying ‘this isn’t what democracy looks like,’ accusing he Republicans of not being democratic, but the fact of the matter is, what doesn’t look democratic to me is the mob rule. And the fact that they simply weren’t back in Madison doing their job.”

This wasn’t about “the workers,” said Johnson.

One thing I do want to get on the record, this was not about individual workers. I respect, I know Governor Walker respects, anybody who works hard for a living trying to build a good life for their family. this really was about re-balancing the equation, giving local governments the flexibility in terms of balancing their budgets which are going to be pretty crimped because one of the ways you’re balancing the state budget now is by reduced revenue sharing. So in the past the local governments basically would have the option of raising property taxes or laying off workers. And that just isn’t enough flexibility. So that’s what Governor Walker is trying to do, just re-balance the equation.

Johnson noted that one of the state senate Democrats actually requested an absentee ballot for an April election, so Johnson says it was obvious that the Democrats intended to stay away from their jobs for a long time to come. The state Republicans just lost patience and went ahead and separated the union provisions out of the budget bill.

Johnson was particularly incensed over the “amount of thuggery” that Republicans back home were facing.

One part of the story that I don’t believe really is being written about adequately enough… the amount of thuggery the threats, the death threats, threats of execution, of being beaten with baseball bats, a local radio talk show host I guess was reading off an anonymous email that was sent to every GOP legislator promising to put a bullet in their heads and further stating that “we know where you and your families live.” I mean, that is so out of bounds, that is so far away from the way our democracy ought to work… you know, our democracy is woking here. There was an election on November 2nd and what the voters expected were some serious minded individuals to step up to the plate and be held accountable and actually start addressing these serious fiscal issues. That’s what Gov. Walker’s doing, that’s what the state legislators are doing and it’s just a shame that it’s being handled this way by the opposition.

I mentioned that one of the main charges that the left is making is that Gov. Walker in particular and Republicans in general are using the budget as a smoke screen to wage war against unions. Johnson said that if they were so worried about all that then the fact that the fled the state didn’t help address that situation. “They should have laid their plans on the table, but they didn’t do that. They ran away.” Further, Johnson said, “with public sector unions the taxpayer is not really being represented properly.”

Johnson was asked how Republicans can win the PR war over this issue in Wisconsin. The senator felt that the unions and their supporters were losing that war on their own because watching the news one can easily see that there is a “total lack of civility” on the part of the unions. Johnson also said that the recent election showed that the voters wanted people like Walker to address the serious issues and the unions were working against that vote.

This is the “perfect time” to address these hard budget issues, Johnson asserted ,and he was severely disappointed about the “lack of leadership” coming from the Obama administration. Obama has not been credible at all in these matters.

Johnson was a signatory to a letter sponsored by Senator Tom Coburn and signed by six other senators that promises to put a hold on unconstitutional and fiscally irresponsible bills.

We need to get serious about this so I think it’s perfectly reasonable to say that any new spending must be offset with cuts to other programs so we’re not adding additional deficit spending. Certainly government programs should be periodically reviewed and renewed. I’m all for sunsetting pieces of legislation so these things don’t keep rolling on long past the time when they are doing anything useful. It makes perfect sense also to make sure that the costs and the text of bills are available for 72 hours before passage so that we actually have time to review these things before we have to vote on them.

The letter states that those that signed the letter will withhold their agreement to allow unanimous consent on bills that meet certain criteria.