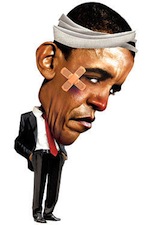 Last year 1,000 high schools competed to win the chance to have President Obama attend their graduation exercises. But this year, the White House is scrambling to understand why only 68 schools have applied for the honor.

The Political Hotsheet blog at CBSNews tells us that internal memos are flummoxed as to why so few schools have applied for the competition for this year’s graduation.

The competition was extended from the February 25 deadline until Friday, March 11 after few schools met the original application deadline. CBS News has learned a White House Communications Office internal memo dated February 22 noted “a major issue with the Commencement Challenge.”

“As of yesterday we had received 14 applications and the deadline is Friday,” the memo said. The memo also urged recipients to, “please keep the application number close hold.”

A follow-up memo on February 28 reported receipt of 68 applications. Noting the competition among more than 1,000 schools last year, the memo said, “Something isn’t working.” It called on staffers to ask “friendly congressional, gubernatorial and mayoral offices” to encourage schools to apply.

After the news of the White House struggling to get applicants got out, the White House would not respond to further questions on just how many applications had been received by Monday, March 7.

Could it be that these union strongholds are not happy with what they consider Obama’s limp support of the teacher’s protests in Wisconsin, Indiana, New Jersey, and Ohio? After all, he promised that he’d walk the picket lines with them and yet he has not done so.

Maybe their enthusiasm for The One has cooled in the face of his lies to them? Just saying.