Let's Have Some Patience on the Budget Cuts 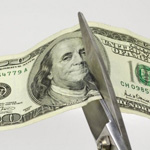 For decades I have been sick and tired unto death of the massive overspending, arrogance, and outright graft of Congress. Like many of you I felt the Tea Party movement was a bolt out of the blue, but a welcome one. I was also jazzed when the 2010 Republican wave overtook Washington and installed so many freshmen congressmen pledging to cut the federal budget. Also like many of you I am frustrated with the slow pace of cuts and would love to see them come faster.

One of the loudest voices decrying the slow pace of the cuts often comes from the radio talkers. Folks like Limbaugh and Levin, for instance, are heard to lament that the GOP is not being proactive enough with the budget cuts. They say the $10 billion that the House Republicans have been successful in cutting so far with the pair of short-term continuing budgets is a drop in the bucket, that it is almost a joke.

It’s easy to make the case, too, that saving $10 billion is the least of efforts especially when Obama has run us up to $2.5 trillion in debt… and here is where the “but” comes in (not to mention where I get hardcore conservatives mad at me). I am not going to sugar coat this “but,” either. I must say that I find the grumbling from conservatives that the cuts are not coming fast enough to be quite unconnected to reality and evidence of an ignorance of not just the current system, but our system historically. Additionally to imagine that we can make all the cuts of our dreams all at once right this minute is also ignorant of the current political situation.

First of all, we only have a majority in one house alone. Republicans only control the House of Representatives not the senate or the presidency. This necessarily means that we simply do not have the power to do just everything we want out of hand — like Obama did only months ago.

That means that the cuts we propose in the House must stand up to passage by the senate and must be able to garner the president’s signature. It must be remembered that, though much diminished in power, the Democrats still wield enough power to block a lot of stuff in the senate. Again, this means we cannot simply do what ever we want. It will take more gains in the senate with good conservative candidates to get to that level of control before we can render Obama powerless on the budget.

That is the political reality whether we like it or not.

But there is yet another reality and this one is actually one augering toward our side, but it is one that is fresh and new in Washington nonetheless. I recently spoke to the GOP’s Chief Deputy Whip, Peter Roskam (R,Ill.), and he laid this point out well.

“The entire conversation has changed in Washington,” Roskam told me. “No longer are we talking about how to get more money into programs. Now the whole conversation is how much do we save and the House Republicans are driving that discussion.”

This is important and is a fact that conservatives would be foolish not to recognize as supremely significant. For almost 100 years it has been the blind assumption by each and every congressman that has mounted The Hill that he can expect bucketfuls of cash to send home to his constituents. It has been de rigueur that both the budget and taxes will soar with each and every new congressional session. That stopped all at once just this year.

Further I would remind everyone that our American system has a bifurcated legislature and a powerful executive for the singular purpose of slowing the wheels of change so that passions are not the single guiding force behind it. This is why we aren’t a democracy but a representative republic. Congress was built to move slowly, sometimes maddeningly so. To expect one election to cause a 180 degree turn around and for that turn around to happen in less than three months is simple-minded.

Further the results of the election we just had are not enough to change the spending attitudes of congress in one election. Taking the senate would probably have done the trick but not taking the senate leaves in tact too many old dogs who don’t want to learn new tricks. But the fact that the conversation about budget cuts has made such an amazing about face is important.

We must also remember that last year’s congress did not pass a full term budget bill at all so this year’s GOP controlled House is already a year behind.

None of this is to say that we should excuse congress for the small cuts it has made thus far and quit the field satisfied. None of this is to say we can avert our attention elsewhere because this one is licked. We have to keep the pressure on, certainly. But to those like radio talker Mark Levin that are throwing their hands up and screaming that we’ve been betrayed I say take a xanax.

Finally remember this. The House has authored $10 billion in cuts and those cuts are occurring in the space of a month. The Democrats proposed cuts of a mere $4.7 billion and they proposed that these cuts should take six months to implement. The House beat them to a pulp on this matter.

The House has just begun to cut, they are on track to do more. These things simply take time. As Roskam told me, it is frustrating, but the GOP led House is not sitting on its collective rear end doing nothing. Keep the pressure on, yes. Make sure your congressman is on track and supporting the cuts, absolutely. But stop with all this idiotic “they are traitors” nonsense, will ya?