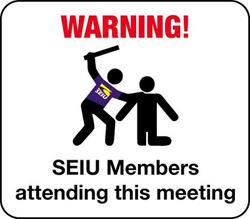 The first one is the tale of a leftist protester arrested for calling in a bomb threat to an aviation business in Eu Clair, Wisconsin a few hours after Governor Scott Walker appeared there to give a speech.

The Chippewa Herald reports that local resident, Patrick J. Knauf, 43, of Eau Claire, called in the threat. Knauf has been involved in the union-sponsored protests of Republican Walker and himself appeared for a recent protest held at the Chippewa Valley Regional Airport which is right next to the company in question. Thuggery number two…

Via The Other McCain we find union thugs hunting down some Republican law makers who gathered to go to dinner and then forcibly invaded the local restaurant in order to disrupt the pol’s dinner committing assault and disturbing the pace along the way.

After the day’s legislative session was over, 7 GOP lawmakers retired to a German Village area restaurant. There, as they were ending their meal, 10 Service Employees International Union (SEIU) members came crashing into the business yelling, screaming, and interrupting the meal of everyone in the restaurant.

State Senator Frank LaRose told the Columbus Dispatch that this was obviously planned because the union thugs waited outside until they got their 10 member contingent all present before they invaded the restaurant.

The restaurant’s owner confronted these unwanted thugs and told them to leave but they began pushing and shoving people refusing to leave. The police were eventually called.

Stacy McCain has another incident of Ohio union thuggery at his American Spectator posting.

What could this be but a threat, perhaps one threatening bodily harm?

So, once again we see the hate and unhinged minds of these leftist union thugs.