For Nancy Pelosi It's Lonely at the... Bottom 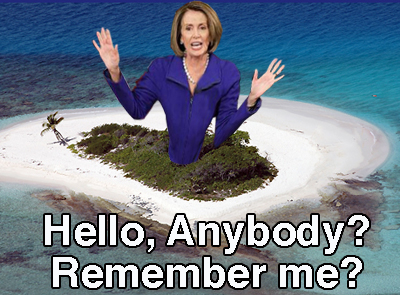 Politico has a sad tale to tell about former House Speaker Nancy Pelosi (I just love that: former. Say it with me, FORMER House Speaker). The once powerful California Representative held a big one-year celebration of Obamacare to show off her keystone legislative victory and like the kid nobody likes, her invites to the party were ignored by all the top Democrats. Not just some of them, ALL of them!

This is a far cry from the power she wielded only months ago. Back in the old days when Pelosi sent out an invite to a press availability, like she did this week with her Obamacare celebration, the entire leadership would dutifully drop anything they were doing and they’d show up to Pelosi’s little show and they’d do it with bells on.

These days, not so much. As Politico notes, Pelosi’s pressers are being ignored by the rest of the Democratic leadership.

House Minority Leader Nancy Pelosi’s not hiding under her desk– she held another press conference Thursday morning to celebrate the one-year anniversary of the health care law next week.

The only thing missing was the rest of the heavy hitters.

…But neither of the pressers, so far, has featured the all-stars. It’s not just a contrast with last year — it’s also a contrast with Republicans, who have been happy to gather their most vocal critics of the law to blast away at one press conference after another.

How far the mighty have fallen, eh?

Naturally the Democrats are all waving this off as meaningless. But all their scoffing and all the attempts to obfuscate the truth cannot hide the fact that Pelosi is obviously no longer considered a leader by the Democrat Party. If Pelosi cannot command the presence of even one other Democrat Party leader and is forced to surround herself with backbenchers and no-names, then it is painfully obvious that the leadership see no reason to jump when she rings her bell.

I will refrain from saying that this is the fastest fall from power in the history of the House — that would likely be hyperbole — but there is no doubt that her power has evaporated and her stock has dropped faster than a 1929 stock broker.

The queen is dead. Long live the queen.