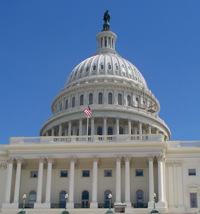 First Congressional Democrats offered a national forced unionzation bill, and now Republicans have countered by putting forth a national worker’s freedom bill. With the luck breaking against unions in Wisconsin and the issue in an uproar in Ohio and Indiana it is now surprise that Congress has come to loggerheads with the same issue.

On Tuesday eight Republicans introduced the National Right to Work Act. Senator Jim DeMint says that he hopes it will, “reduce workplace discrimination by protecting the free choice of individuals to form, join, or assist labor organizations, or to refrain from such activities.” Unions are less than 8 percent of the work force at this point yet those states that have more union members than others are doing less well. DeMint says that having unions is part of the problem.

Right to Work states have consistently outperform forced-union states in factors that affect worker well being. From 2000 to 2008 roughly 4.7 million Americans moved from forced-union to right to work states. A recent study found that there is “a very strong and highly statistically significant relationship between right to work laws and economic growth,” and that from 1977 to 2007 right to work states experienced a 23 percent faster rise in per capita income than states with forced unionization.

Naturally if any business wants to hamper itself by entering into collective bargaining with its employees, well it is a free country. They have every right to do so. But what the states shouldn’t have a right to do is force all employees in their state to join unions. They shouldn’t force employees to pay dues whether they want to or not. This is what DeMint hopes to stop.

Let those interested in unions join them of their own free will. It is un-American for force them into it.

Of course, the Democrats already introduced their own forced unionization act with the Employee Free Choice Act (EFCA), a bill that takes away free choice of the nation’s employees and empowers unions to grow exponentially.

This bill has failed numerous times despite that President Obama claimed that he’d make it a priority of his presidency. The reason it has failed is because the Senate could never muster the votes for it despite the passage of it in the House. The Senate basically knew that the majority of Americans just plain didn’t support the law.

So, which side will win? Or will we end up with status quo after all? It’s quite a battle, to be sure.