A Nationwide Movement To Eliminate Voter Fraud Is Born

This past weekend the first national True The Vote Summit was conducted by the folks that successfully rooted out vote fraud in Harris County, Texas during the 2010 elections. Folks from 27 different states were in attendance to learn how the Harris County effort was conducted in hopes of replicating the same back home, but with the hard lessons already learned.

On Saturday those in attendance heard from True The Vote’s wizened members and learned what the best practices were to “true” the voting process in their own areas. Along with the True the Vote experts attendees also heard from the Wall Street Journal’s John Fund and election law expert Christian Adams. The day’s activities were wrapped up in a neat, if somewhat eccentric bow as those gathered heard an entertaining address by none other than our own Andrew Breitbart.

This event wasn’t just a rally cry for free and fair elections, though indeed it was that. TTV’s Mark Antill, Alan and Colleen Vera, Nancy Geigel, Vickie Pullen and the indefatigable Catherine Engelbrecht gave detailed information on how folks can set up their own poll watcher programs, told the summit goers how to keep the process free of partisanship, and discussed the ins and outs of the legal system they came up against when implementing their 2010 program. I even got a few minutes to let the folks know how to use the Internet and the New Media to help support their efforts back home. 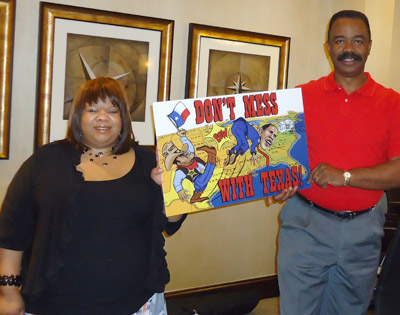 But make no mistake about it. Despite what the left has said about this effort, their goal is not to inject a partisan agenda into our elections but to make sure that every election nation wide is free of fraud. Time and again TTV’s members told of how they worked hand in hand with Democrat poll watchers to make sure that everything was on the up and up during the elections.

Still this hasn’t stopped the left from whimpering. I previously reported Friday’s events, but I waited until today to talk about Saturday’s events to see what the left-wing press would say about it all. They did, indeed take a few cheap shots as predicted.

The left ridiculed the event as filled with old folks, and cried because hard-core left-wing bloggers were not invited to cover the event.

It isn’t a surprise that the hardcore lefties were excluded, though. After the unfair and untrue attacks that TTV received at the hands of the far left in 2010, it isn’t surprising that they decided to make sure they could keep their minds on their organizing instead of fighting constant rearguard actions against the lies and calumnies of the far left. After all, these leftists don’t want free and fair elections. They want to be able to steal elections at will. Efforts like TTV’s threaten the left’s power to steal close elections as they have so many times.

The whining aside, it is a fact that everyone involved at the event are from the conservative side of the aisle. It is the contention of TTV that truing the vote is good for the right because vote fraud is nearly an exclusive crime of the left. But despite the fact that making sure our electoral system is free and fair for everyone might help destroy one of the left’s tools of stealing elections, it is truly a non-partisan goal to make sure that the integrity of our system is assured. The left should want free and fair elections as much as any other American.

In fact, as Hans Von Spakovsky, John Fund, and Christian Adams all said, making sure the polls have integrity even benefited the left during Obama’s election. Despite the left’s constant claims, the voter ID laws in Georgia and Indiana, for instance, didn’t oppress the vote for the Democrats. In fact, just the opposite occurred. Democrat voting doubled in Democrat districts in these two states with the strictest voter ID laws in the nation. 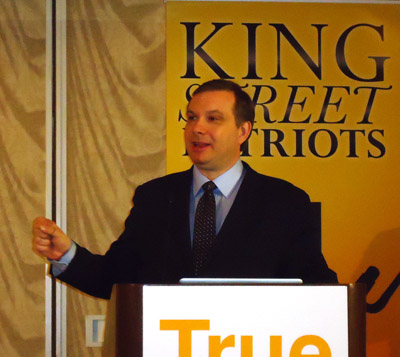 There was one uncomfortable incident at the summit, however. During the questions and answers period of John Fund’s keynote address someone stood and asked the Wall Street Journal’s resident vote fraud expert whey he didn’t write more about the vote fraud faced by former GOP Senate candidate Joe Miller in Alaska.

Fund said that as a writer he has to make decisions on what he has time to cover and what he doesn’t. After all, there is only so much space and time. He then said that he also has to decide if candidates in the news calling out voter fraud really have a case or if it is all just “sour grapes” (his words).

… and here is the “uncomfortable” part. It just so happened that Joe Miller was in the room listening to Fund and it appears that Fund was not aware of Miller’s presence. Joe Miller leaped to his feet and asked for some time to “rebut” Fund’s claims of sour grapes. Miller proceeded to inform the folks about all the fraud that was not made common knowledge during the 2010 election. 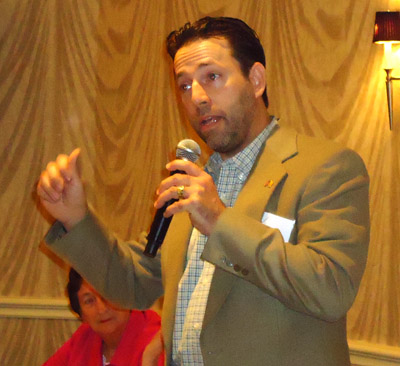 After Miller had his say Fund countered by averring that he was not talking about Mr. Miller having “sour grapes,” but that he was just talking “in general terms.”

After Fund came an address by Christian Adams, known as the man in the Obama Justice Department that blew the whistle on the administration’s refusal to prosecute the obvious voter intimidation perpetrated by the New Black Panthers in Philadelphia during the 2008 election. 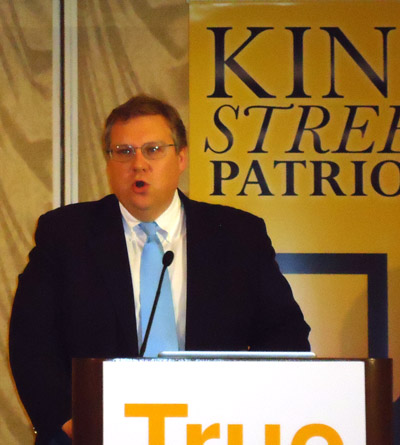 Adams gave a great address but one of the most important things he brought up was that there is a section of the Motor Voter law that demands that every state make sure that its voter rolls are clear of fraudulent voter registrations and are true rolls of actual voters. Adams informed us that the Democrats refuse to follow the law and carry out these required purges of illicit registrations.

He said that one of the things that could really shut down Democrat vote fraud is to enforce this provision. He hoped that groups could sue under this provision and force Democrats to obey the law.

Then came Andrew Breitbart in yet another whirlwind performance. I’ve seen Andrew speak half a dozen times, now, and his manic, near steam of consciousness speeches get better every time I hear them. 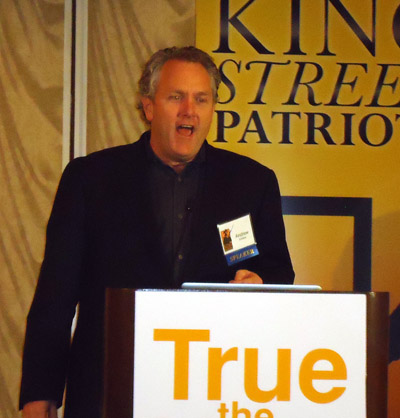 Breitbart’s address was less about vote fraud than the others and more about his bailiwick of the culture war in which we are engaged against the far left of Hollywood and the media. He’s a bulldog for fairness and for taking down the far left’s wall of propaganda. But he’s not a politics guy, he told us.

He told us that he started life as a liberal. This surprised some in the audience. Breitbart has become a conservative hero more by default than by device because the left has filled the news with so many lies and agenda driven personalities that he could stand it no more. Ultimately he became one of us.

It’s been 2 years since I joined the Tea Party movement, I first started as a defender of the movement but then after two years I realized that, hey, I’m one of you!

I am the only media mogul that has two car payments and a mortgage, I don’t have a private plane, I’m just like you guys!

Breitbar’s speaking style is filled with amusing anecdotes and a wonderful West Coast vernacular that gives a glimpse of that Hollywood world at which he rebels.

In fact, I’ll just post my quick notes of what he said giving you a bit of a taste of his flair.

Traveling across the county, I have a lot of time to think. One of the things I thought about was a basic observation of our culture. The media is our enemy. The media is at war with us. Observation one: the media is the problem. The media won’t report the stories of the day. So to get the real stories out we’ve all had to become the media. That’s what happens when people come to me and I post these stories.

Now if you’re from the Muslim Brotherhood and you want to donate to NPR, they love you.

So what’s the solution? We need to raze the mainstream media, we need to eliminate them. I want you to cheer when The New York Times fails. They choose to ignore the Tea Party movement, tell the media that “we’re sick and tired of the civil war you’ve declared on the American people.”

What if we created the Council on American Tea Party Relations, would they pay attention? No. We need to take them on. Your Harry Reids and Nancy Pelosis are the week sisters without the media backing them up.

There is another thing I realized. The Tea Party movement is driven by the women. I come to these things and I get picked up by a woman and in the time I get from the airport to the hotel I learn more about what is going on here on the ground than I can even take in. It’s like they are the general Schwartzkophs of the movement.

It’s an unspeakable crime what the left and the media have done to families in the minority communities. Maybe that’s want they want? But we need to go into these communities and say we are here to help. The guilt is officially over. That is the weapon they’ve used to destroy us.

But these changes have come not at the hands from the Republican Party. They want the Tea Party to go away because its uncomfortable.

Now I helped create Huffington Post. I know, crazy, isn’t it? But what it has done is drive the Democrat Party further left. Even The New York Times has had to prove that they are left of center. We are moving toward a more British media culture of left and right media without this false assumption that the media is unbiased.

But the left’s goal is to shut you up. They want to destroy the people’s voice. Well WE are going to fight the Lamestream Media. You folks are the media, now. It’s about taking down the entire institutional left. They don’t control it all any more.

What better way to end the event than a wonderful rant from Andrew Breitbart?

I can’t think of any. 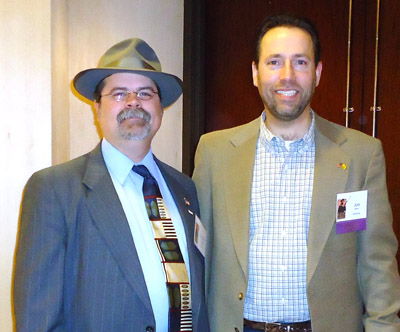 Me with Alaska’s Joe Miller