VIDEO Interview: Remember Dale Peterson Who Said His Opponents 'Don't Give a Rip About Alabama'?

During the early days of the 2010 primary season you all might recall the campaign commercial of that cowboy hat wearing, horse ridding, straight shooter from Alabama who was looking to take the nomination for Alabama’s Agricultural Commissioner? You might recall that Ag Commish candidate Dale Peterson looked straight into the camera and told us all that his opponents “don’t give a rip about Alabama!” You also might remember that his TV spot went viral on the Internet and he became the new favorite of straight shooters everywhere.

Well, I ran into Dale at CPAC and was graced with the opportunity to put a camera before the great Mr. Peterson and to let him give us all what for!

Before I show you the video, though, I must say that Peterson really is just like his commercial presented him to be. A good ole boy, not much on the horsetwaddle that politicians are peddling, and ready to say it straight and from the heart. Everywhere Peterson went folks wanted to shake his hand, get photos with him, and congratulate him for his brief run for Ag Commish.

…speaking of folks wanting a photo with him… 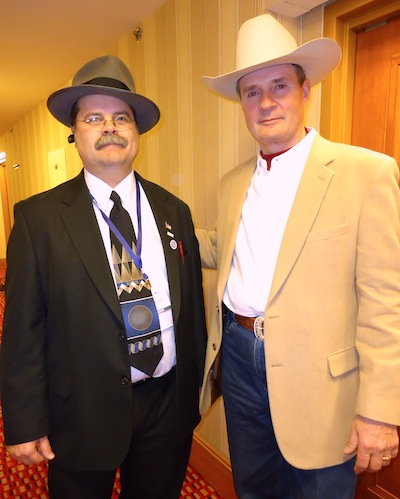 Dale Peterson of Alabama and Warner Todd Huston. We’re hatted, booted, spurred and ready to take on the bad guys!

As I said, Peterson is getting a ton of support from the folks. Peterson wasn’t quite sure where he was headed in politics and is taking it all one step at a time. But he told me he isn’t “going away.” He’s ready to take it to the fakers and thieves in office. So, what’s next for Peterson? Watch and learn…

I want to thank RedCounty.com and RightPundits.com for sponsoring me at this year’s big bash.